“Yes, Virginia, there is a Santa Claus.” 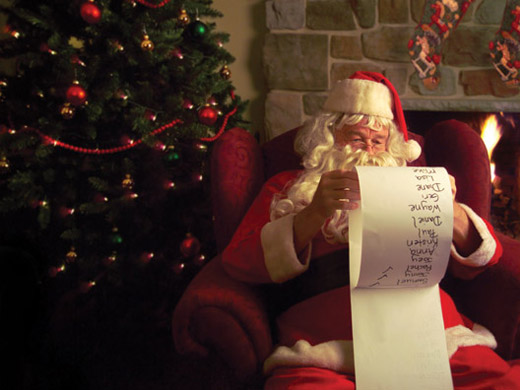 It’s true, isn’t it?  He may not be exactly what the kiddos think he is, but there is certainly someone out there who brings gifts to all the good little boys and girls on Christmas Eve.  He (or she) works hard all year round, he definitely knows who’s naughty and nice, he knows just what the little ones want for Christmas.  And, if you’re still not convinced, well, the jolly guy in red is, in fact, based on a real person.

Let’s go all the way back to the 3rd century…

Once upon a time there was a monk named St. Nicholas.  It’s believed he was born sometime around 280 A.D. in Patara, near Myra in modern day Turkey.  He was known for his kindness and for being an exceptionally devout fellow.  Legend has it that he gave away all of his inherited wealth and traveled around the countryside helping the poor and sick.  Over time his popularity spread and he became known as the protector of children and of sailors.  By the time of the Renaissance, St. Nicholas was the most popular saint in Europe, especially in Holland. 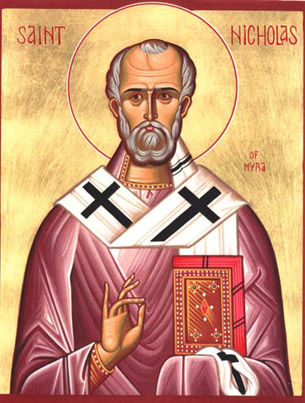 The guy who started it all, St. Nicholas

The legend of St. Nicholas began to spread into American culture at the end of the 18th century.  In December 1773 and again in 1774, a New York newspaper reported that groups of Dutch families had gathered to honor the anniversary of St. Nicholas’ death (remember, he was big in Holland).  The Dutch had given him the nickname “Sinter Klaas” which is a shortened form of Sint Nikolaas (Dutch for Saint Nicholas) and this is where the American version of “Santa Claus” came from.  As his legend spread throughout the United States through the early 19th century, gift-giving centered around children began to become a part of the celebration.  Stores began to advertise Christmas shopping in 1820 and by the 1840’s, newspapers were creating separate sections for holiday ads, which often featured images of the newly-popular Santa Claus. Around this time, an Episcopal minister named Clement Clarke Moore wrote a Christmas poem called “An Account of a Visit from St. Nicholas,” and it was this poem that is largely responsible for our modern image of Santa as a round, jolly old elf who could magically scale chimneys, and who flew through the air on a reindeer-led sleigh.  We know this poem better as “Twas the Night Before Christmas.” 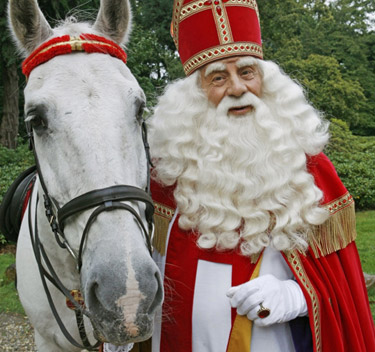 Sinter Klaas aka Santa Claus to the Dutch

Meanwhile on the other side of the pond, St. Nick was up to the same thing.  To the Swiss and German he was Christkind or Kris Kringle (this character actually accompanied St. Nicholas on his holiday rounds);  In Scandinavia he was Jultomten; the English knew him as Father Christmas; In France he was Pere Noel, just to name a few.

While the custom of gift-giving has been associated with Santa Claus for centuries, the logistics changed somewhat around the time of the Protestant Reformation.  Up until the Middle Ages children were given gifts on the evening before December 6th (the date that commemorates St. Nicholas’ death).  Some European countries still do this.  Martin Luther encouraged the tradition to be moved to the Christmas season to focus the interest of children on the birth of Christ instead of a saint.  As you can see, the tradition caught on and most of us “become” Santa Claus on December 24th.

As a parent of a 3-year old, my days of being Santa Claus are just beginning.  My son hasn’t really grasped the concept yet, but by next year he’ll be in full swing Santa-believing mode, I’m sure.  I have such wonderful memories of how magical Christmas was when I was little and how special traditions were.  Take milk and cookies.  Traditional, yes.  And my dad – ahem – Santa loved them.  Me?  I like them, sure…but is it bad to teach my son that Santa likes wine, too?  I have a friend who grew up leaving glasses of whiskey for the 3 Wise Men, so what’s the difference, right?   It’s not much different, either, from the Irish who leave Santa Guinness and mince pies…or the Aussie’s who leave him beer.  By George, Santa works hard all year.  Santa deserves  something he (or she) loves.  Wine it is.  And perhaps a bowl of pita chips to clear the palate. 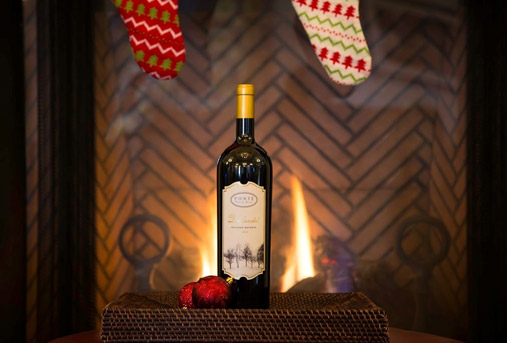 A perfect choice for Santa

Treat the Santa Claus in your home to a wine that is totally appropriate for this time of year and that he’ll (or she’ll) adore: 2012 Holiday Reserve Zinfandel.  Spicy with aromas and flavors of boysenberry, caramel and vanilla oak.