Wine Every Day, Everywhere? Maybe Not

As one who blogs for a winery, I have wine on the brain every time I go out to eat.  Scratch that – I have wine on the brain every time I eat.  At this point, it’s not really intentional, it’s just the way it is and I don’t give it much thought…ironically.  And, anyways, wine belongs everywhere, every day, right?  I admit, occasionally, I’ll be somewhere, eating something and I think, “Boy, if wine doesn’t belong somewhere, it’s here.”  Case in point: lunch with my dad and son recently at a place called Primanti Brothers.  Allow me to give a little background on this über famous Pittsburgh establishment …

Back in the early 1930’s, Joe Primanti opened a cart in Pittsburgh’s Strip District, a busy area of the city filled with warehouses and produce yards, selling sandwiches to truckers and early morning/late night workers at all times of the night.  He and his brothers soon bought a small storefront in the District and continued to sell their sandwiches.  Mind you, this was during the height of the Great Depression, yet, the Primanti’s prices were fair and the brother’s continued to be successful.  One winter, a trucker drove through the city with a load of potatoes.  Worried they had frozen while en route, he brought a few over to the restaurant to see if they were still good.  John Primanti fried ‘em up, and they looked fine.  Some patrons asked for them, so John stacked the hot fries on the sandwiches he was making…and the rest, they say, is history.  Today, when you order a sandwich at Primanti’s, you are presented with a monstrosity of a meal: your choice of meat, provolone cheese, fresh cut fries, tomatoes and coleslaw is piled between thick slices of Italian bread.  The concoction is brought to you not on plates, but on a sheet of wax paper.  First timers often think it’s a joke, I know I did.  The original location (the company now has 17 locations) is open 24 hours, 7 days a week, takes only cash and provides patrons with one ginormous menu conveniently propped on a wall.  Scanning it over, you notice the “Pitts-burger” sandwich is the #2-best seller.  Naturally, you start to look for the #1-best seller, which you don’t find.  Of course, you ask your server what it is and they answer, “Iron City beer.”  Are you beginning to see what I mean about wine not belonging in certain places?  Still a staple for Pittsburgh’s blue collar workers, Primanti Brother’s also caters big time to families, celebrities and tourists, thanks to its plentiful exposure in the media – Man vs. Food, The Daily Show with Jon Stewart, you get the picture. 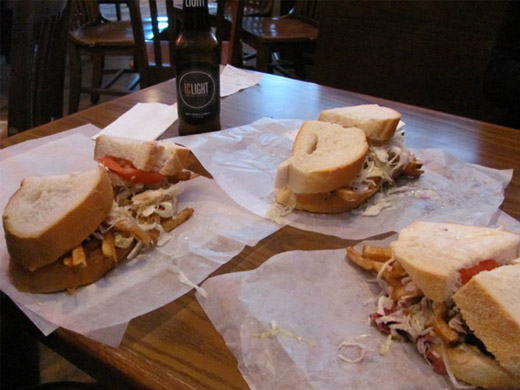 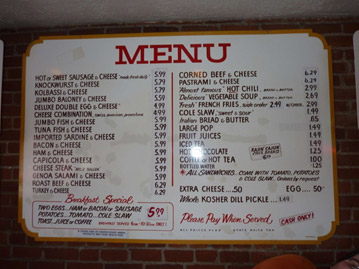 You won’t find wine on this menu!

My meat-and-potatoes father thinks Primanti’s is the best thing since sliced bread.  Me?  Eh.  This might definitely will make me a traitor to my now-home city, but I think it’s overrated.  There, I said it!  Hey, the slaw needs salt, ok?  And the fries aren’t crispy enough.   Alas, these folks have been around for over 80 years, so what do I know?  And besides, I love my dear old dad, and when he comes for a visit and wants to go to Primanti Brothers, by George, I take him.  He ordered the #1 and #2 best-sellers.  I ordered the vegetable soup.  Yes, oddly, they have vegetable soup.  And then it happened – I began to think about wine.  “What wine could possibly pair with that sandwich that’s as big as my head?”  Asking for a wine list would have gotten me kicked or laughed out of the restaurant, and I was already taking a big enough risk by bringing my son in with a San Diego Padres hat on and by ordering vegetable soup.  So, I asked my dad, “What kind of wine do you think you’d like with that?”  He answered, “The kind that’s called beer.”  Here and there, throughout the rest of the day, I thought about it.  My conclusion was that, sometimes, you just have to let things be and surrender to the fact that only ice cold beer or a Coke will do.  Sparkling wine – Moscato, Rose Spumante – might come close.  It’s amazing how versatile a wine with bubbles really is, especially with very heavy foods.  Think fries and fried chicken and potato chips, and even sandwiches as big as your head.  Ah, but my soup…I’m thinking Vermentino would have been mighty fine. 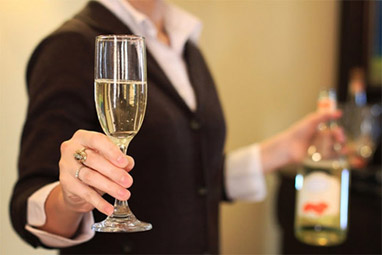 So, what say you?  What do you eat or have you eaten that has you reaching for something other than wine?