The next morning, after waking up and being unsure if I was still in a food coma or if the early morning hours at Bourbon Street’s Old Absinthe House were still in effect, FOB (friends of blogger) HOB and I ate at a New Orleans restaurant, or rather institution, Mother’s. Nearly every table was filled and a line of hungry waiters were nearly going out the door, so I knew we were in for a treat. My Mae’s Omelet was stuffed with smoky, sweet shreds of black ham, plump mushrooms and scallions and served alongside creamy grits, ginormous homemade biscuits and chicory coffee. All I can say is thank goodness our main method of transportation that weekend was by foot. It was the kind of breakfast where one literally doesn’t think they can take another bite, but the food is so good, they keep on eating, calorie-counting having blown straight out the window as soon as they glanced at the menu. To top it off, our waiter generously gave us a hunk of fruit cocktail bread pudding drowned in bourbon sauce. 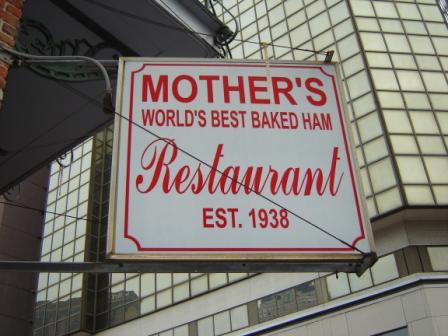 After an entire day at the World War II Museum, HOB, FOB and I ventured back to the French Quarter for a rehearsal dinner. The theme? New Orleans, of course. To start, we sampled the raw oyster bar. Fresh, cold, creamy oysters were served with vodka-tomato shooters, or simply with hot sauce and a squeeze of lemon. The purists that we are, HOB and I indulged in mostly plain oysters with the occasional dash of hot sauce. Though champagne is a classic accompaniment to oysters, I found my glass of Ponte’s fruity Chardonnay was a winning match. Dinner was a smorgasbord of New Orleans classics: Shrimp Etouffee, Pulled Pork, Jambalaya and gumbo over rice. The Jambalaya was one of the best things I’ve ever tasted in my life and it was delicious with my Cabernet Sauvignon, which was not too oakey and full of red fruit flavors.

Dinner was followed by dancing to a live band while wearing Mardi Gras masks, feather boas and beads which in turn was followed by a visit to the famous Cafe du Monde after midnight for beignets and chicory coffee. Beignets are basically a fried donut with no whole covered in powdered sugar and, here, served with hot chicory coffee. Chicory coffee was invented as a means of stretching out coffee beans. The root of the endive plant is ground with coffee beans to make a thick, rich cup of coffee that has a slightly tangy flavor. Now, perhaps it was because we were at the Cafe late, but the beignets and coffee were a disappointment. Both were lukewarm and just so-so. Aside from HOB and I, everyone in our party of 9+ people loved them, so maybe it was just us. Our disappointment was short-lived, though as we discussed our next and last day in New Orleans…and all the things we still wanted to eat.