In honor of the Saints making it to the Superbowl we’ve written a 3-part series on Erica Martinez’s travel to the Big Easy.

I had two things in my head as I arrived in concourse C at the Louis Armstrong International Airport in New Orleans, Louisiana: Born on the Bayou by CCR and the purpose of my journey south: my good friend’s wedding. This being my first visit to The Big Easy, I was, of course, excited about the food. Though I’m ashamed to admit it, my knowledge of New Orleans cuisine consisted of beignets, crawfish, Emeril Lagasse and Zatarain’s.

Besides having one of the best weekends of my life in what I now consider the city that never sleeps, and attending the best wedding ever, I learned this: New Orleans knows how to do food.

The first meal took place at a restaurant “where the locals ate” according to our concierge. Hobnobber’s just off Canal Street was hidden in the back of a building, at the end of a dark alley-like hallway. Consisting of a handful of sticky tables with just enough room for patrons to squeeze through and place their order, Hobnobber’s was visually no 5-star joint. But don’t some of the best meals come out of these dives anyway? In this case, it was true. I ordered gumbo, a rich and spicy soup simply overflowing with whole crabs, okra, shrimp, andouille sausage and a gang of Creole spices. HOB (husband of blogger) indulged in a fried shrimp po boy doused in hot sauce. MOB (mom of blogger) selected the catfish platter. Heaven, heaven and more heaven! There was no wine on the menu, but my gumbo, with its array of spices, would have been divine with Ponte’s crisp Riesling or a fruity red, like Ponte’s Beverino. 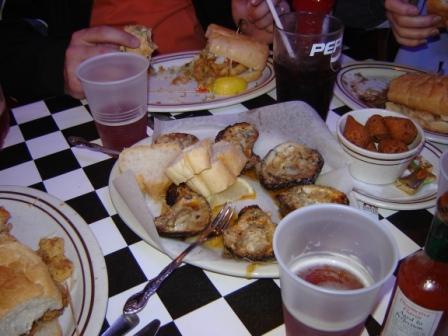 Thoroughly stuffed, we set out on a walk around the French Quarter. The city of New Orleans exudes personality and life. Between the beautiful French-Spanish architecture of the buildings, the vibrant colors around every corner, the animated shouts of “Who Dat?”* from virtually every local and the sad, smoky, soulful sounds of live jazz humming throughout the city, I was convinced there was no place on earth like New Orleans. And I loved it!

* “Who dat? Who dat? Who dat say dey gonna beat dem Saints? Who dat? Who dat?” is a chant used by New Orleans Saints fans as a show of support for their team. On a typical visit to The Big Easy, and especially if it’s during football season, you will hear this phrase (or its shortened version of “Who Dat?”) many, many times.