Our third day in New Orleans was a rainy one. Starting with a guided tour of the French Quarter, FOB, HOB and I learned the origin of the word “cocktail”, that it took nearly 60 years for the French to settle the city of New Orleans, and the difference between balconies and galleries, among lots of other facts. As we congregated for lunch I knew exactly what I wanted: a fried oyster po boy. And that’s exactly what I got at the famed Acme Oyster House. 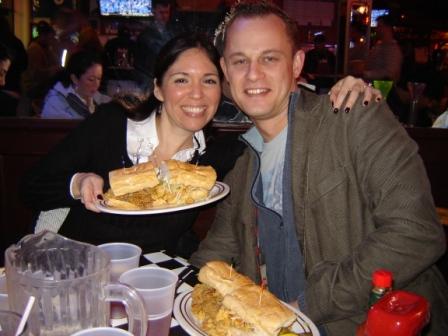 I ordered what is called a “1/2 and 1/2”. Bread is stuffed with a half each of fried shrimp and oysters and served simply with mayo, tomato, lettuce and pickle–no French fries needed, trust me. I barely spoke as I ate and only paused to sample the chargrilled oysters we had ordered for the table: fresh oysters grilled and seasoned with butter and romano cheese. It was absolutely superb and something I know would taste inferior in any other place besides New Orleans. And while I’d like to give it a wine recommendation, I must say that only a cold beer will do here…preferably surrounded by Saints fans.

The morning I went home one would think that the eating was over, but HOB and I had time for one more meal before we flew home, and it was one of the best. Brennan’s has been in New Orleans since 1946 and is the first restaurant I’ve encountered where breakfast is a multi-course experience with recommended wine parings. Wine with breakfast! To start the three course affair, our tuxedoed waiter brought oyster soup (yes, more oysters) and crusty French bread, which we happily devoured with the remainder of our Bloody Mary’s–a treat we’d ordered while waiting for our table. My entree was Eggs Shannon, two poached eggs on a bed of creamed spinach, resting on fried trout and covered with hollandaise sauce. My recommended wine was Chardonnay while other egg dishes on the menu suggested Fume Blanc, Sauvignon Blanc and even Gewurztraminer. I would have been more than satisfied stopping after the entree, but dessert was included. In my case it was Banana’s Foster, cooked right before our eyes, tableside, flames and all. It was divine. Well, the two spoonfuls that I ate were divine.

HOB and I waddled out of Brennan’s and strolled the French Quarter one more time, reminiscing about the weekend we’d had. I must say that seeing friends, parents and the wedding were the stars of our three days in The Big Easy. But the food, oh the food was a very close second. We grabbed our luggage from our hotel and hailed a cab to the airport, leaving the sights, sounds, smells and flavors of New Orleans behind.