What’s With the Bacon Binge?

What a story bacon has to tell.  At once, just a breakfast meat.  And then a couple of Michelin-starred chefs got their claws on it, started serving it in their $250 prix fixe menus, and suddenly, bacon is the new black and is showing up on virtually every fine restaurant in the country.  Soon, bacon is donning the top of cupcakes, and overpriced hipster shops are making a killing on bacon shaped band aids.  All at once, bacon has catapulted from the frying pan to the center stage.  Bacon aficionados are born – they are members of bacon-of-the-month clubs (seriously), they drink bacon flavored vodka  and they make a mockery of the health-conscious, salt-weary, vegan tree-hugging stroller moms, oozing with the attitude of, “If you’re not into bacon, dude, you’re just not cool.” 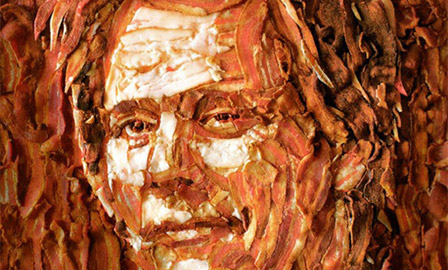 Kevin Bacon made out of bacon.  What next?  Photo credit

Bacon is indeed one of man’s greatest achievements.  It is smoky, salty, meaty, fatty and crunchy all at the same time.  I bet the manna in Exodus tasted like bacon.  Bacon, like wine, has the ability to make many things taste better.

But…have we gone overboard?  At some point, people started to put bacon in places where it just doesn’t belong.  Bacon covered chocolate, for instance.  Alone, the two elements are perfect.  Together, a mess, in my opinion.  A perfect example of why to not fix what’s not broken.  Bacon lip balm, bacon dental floss, bacon mints – enough already.  And just in case you’re wondering, yes, bacon is making its way into the world of wine.  Doing some research, I came across a Swine and Wine Club!  Monthly shipments of a pound of gourmet bacon plus its perfect wine partner.  Oy vey.

It’s safe to say America is having a love affair with bacon.  While bacon itself will be around forever (it must), the growing trend of flavoring everything with it will come to an end.  Much like cupcakes, gastropubs, flourless chocolate cakes and the Food Network, America will tire of it and move on to the next cool thing.  Meanwhile, while all this porky-ness lasts, we might as well give you some good wine advice for all your bacon cravings.

BLTs – Try giving this classic sandwich an update by substituting the standard red tomatoes for fried green tomatoes.  While you’re at it, pick up a bottle of 2012 Rose Spumante.  Sparkling wine is an amazing pairing with fried foods, as the bubbles cut through any greasiness and refresh the palate.  The fruitiness of our Spumante compliments the smoky flavors of this indulgent meal.

Bacon-Wrapped Dates – Take a date, remove the pit, stuff it with a cube of parmesan cheese, wrap it in a piece of bacon, bake in the oven until it’s crisp…you’ve got something hot, smoky, salty, sweet and incredibly delicious.  The subtle sweetness of 2012 Beverino compliments this complex little appetizer beautifully.

Grilled Bacon-Wrapped Meatloaf Sandwich at The Restaurant at Ponte – A glass of 2011 Syrah will not disappoint.  This full-bodied red wine with oak and black pepper spice is great with any kind of smoky and/or grilled dish.

–How do you feel about the bacon craze?