What are these holes in my shoes? 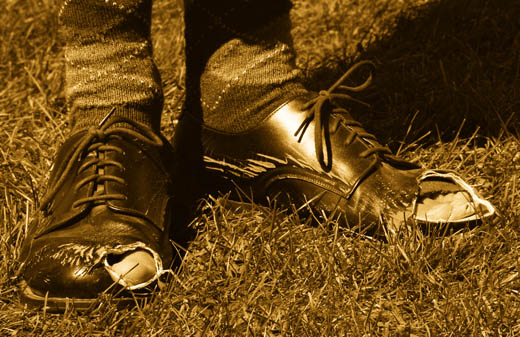 Another tale from the past

The accountant rubbed his eyes. He could not see a thing. His contacts were dried up and were glued to his eyes. What had happened? Where was he? Was he inside a garage? And, what were those holes on top of his shoes?

Back in the eighties, waaay before the winery was even a dream, we used to throw big grape stomping parties at our old ranch house in the vineyard. We parked our cars at end of a very long driveway with candles marking the way. Lots of friends from LA and San Diego would come to drink, eat, stomp, and dance to the mariachi music.

At one of these parties, our tax accountant (a Beverly Hills type not used to the country) started making unwelcomed passes at one of the ladies. After a couple of warnings, and since he was totally wasted, sheets to the wind, I had the vineyard guys escort him to his car. They grabbed him by the arms and after a little struggle he went limp and was dragged all the way to his car. They put him in the back seat where he passed out.

So, back to the garage… After clawing at his eyes, the accountant was finally able to remove one of the contacts and stepping out of the back seat of the car could see he was in a strange place… Was it a dream? He went to the door and started banging. The door opened slowly, and a groggy guy appeared, gun in hand, asking what the heck was going on? The accountant and the other man soon found out what had happened. The accountant had traveled all the way to Encino, sound asleep in the backseat of another guest’s car! Obviously the other guest had also had a few too many and had not noticed his unusual cargo. A $200 cab fare and two hours later, our hero and his car were reunited for the return trip to the city. Needless to say, he was moved to the B list. True story.

Morale of this story? Drink too much at our parties and we might feature your embarrassing story in these pages. Kidding aside, we thank you for your support and see you at the winery.