It’s a no-brainer for many people that daily dinner MUST include some form of meat and potato. However, during this time of year, these two supper staples nearly disappear from my table, not because I don’t enjoy them, but because the summer bounty simply begs to be the star of the show: colorful heirloom tomatoes, tender zucchini, sweet corn, luscious eggplants, and a plethora of fruit are all so plentiful and delicious. Not to mention the fact that they only appear at the farmer’s markets for a few short, but brilliant months. While I crave hearty comfort food in the fall and winter, I want to be refreshed and invigorated in the summer, and these foods do just the trick.

As fate would have it, on a sunny day off with HOB (husband of blogger) last week, I spied the most handsome steak I’d ever seen: a huge, red porterhouse. The strip steak side of it was well marbled and the filet was thick. I looked at HOB and asked, “How about steak tonight?” He smiled. The butcher praised our choice and commented that this particular local cut of meat came from a nearby farm, and was better than some of the grass-fed and aged steaks he had eaten. Our minds were made up and we snagged that porterhouse before anyone else at the butcher counter could beat us to it. 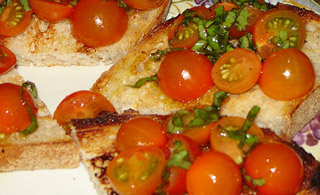 Once home, I put HOB in charge of the grill and meat and I got to work on the sides. We decided on no fancy sauces or garnishes on the steak; just salt and pepper. We grilled up some sourdough bread and rubbed it with raw garlic before topping the slices with a mixture of sungold heirloom tomatoes, basil and olive oil for a fresh bruschetta appetizer. I sealed up a couple potato pouches (potatoes, onions, garlic, rosemary, olive oil, salt and pepper sealed up in foil pouches) and tossed them on the grill before HOB brought out the steak. The last things to cook were thick slices of zucchini and squash, which HOB barely found room for on account of the caveman-sized meat.

The smells coming off the grill made waiting torturous, but finally, it was time to eat. I dressed the grilled zucchini with a lemon vinaigrette, shaved aged cheddar and toasted almonds, and dinner was served. HOB took the strip, while I got the filet. Now, a lot of people insist that the best cut of steak is the strip or perhaps a ribeye due to the delicious marbling of fat running through, but I must say that my favorite (outside of a great hanger steak) is the filet mignon. There is virtually no fat running through it, but there is something so incredibly delightful about a perfectly rare filet that melts in your mouth like butter. It was luscious. To drink, we drank a bold yet fruity Chianti which was outstanding with our meat. It even tasted great with the rosemary-scented potatoes.

What I learned is that there is definitely still room for meat and potatoes in the summer time, as long as there is something summery on the side. On second thought, no, I’d have been happy with that filet and the wine alone.