Nicole (Nicky) LaChapelle Forester was a living angel. She was the kind of person who would always come running, no matter who needed her or what was needed. She really believed it was her duty to do so – usually at her own expense and to her own detriment. She was often called a living angel by our friends.

We first met four years ago in a local chapter of the Red Hat Society. Nicky and I gravitated together, partly due to our common love of wine. We became best friends within a year. I had joined a few wineries in Temecula, Ponte being my absolute favorite.

Nicky has always loved wine, but bought only what she could usually afford – by the box or jug – until she received a small inheritance! I knew she liked only dry wines, but she hadn’t had much experience with any really good ones. I’m proud to say that I was the one to introduce her to Pinot Grigio. And the first one she ever tasted was Ponte’s!

We have been to numerous wineries all throughout the state and on Vancouver Island. We’d spent time in Napa, Sonoma, Santa Barbara, and smaller areas just for the wine experience. Nicky was open-minded and tried other wines, but always came back to Pinot Grigio. Nicky had Pinot Grigio everywhere we went when it was available and has had labels from all over California, Oregon, Washington, Canada, France, and Italy. However, she held steadfastly to Ponte’s Pinot Grigio. Nothing else ever compared with it as far as she was concerned. Ponte’s server, Abby, called us the Pinot Girls because every time we came in we each ordered a case of it!

Nicky and I went to Ponte’s New Years Eve party on December 31, 2007, and had a fabulous time. We enjoyed every minute of it and Nicky decided she wanted to do it again the next year. We were regulars at Ponte every two months and every shopping night. Abby was always happy to see us – as long as there was still Pinot Grigio in stock! But woe be unto the staff when you ran out! 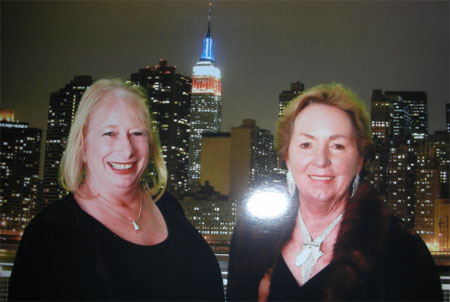 Sad to say, life happens. Nicky suddenly and unexpectedly passed away August 18, 2008, while we were traveling together on Vancouver Island, Canada. At least she was doing something she loved and had never had the opportunity to do before – travel. And drink great wine. She learned to appreciate good wine, and to her Ponte’s Pinot Grigio was the absolute best.

Now it’s a bit hard for me to come to Ponte for my shipments. (Well, only a little hard.) I always remember Nicky, even more so when I go there. Abby and I usually have a good cry over her, too.

Nicky had been a living angel. Now I feel she is up there watching over me and making sure that I continue to go to Ponte and take in as much Pinot Grigio as I can handle. Come to think of it – I wonder if she really liked me as a friend or only because I was a member of Ponte and could get her favorite wine at a discount! Nah. Nicky was the most genuine and generous person I’ve known. She was a living angel, and now she is an eternal heavenly angel.

Nicky’s place in heaven has to be watching over Ponte’s vineyard. Winemaker – don’t even think about changing Pinot Grigio! Lightening would surely strike you!

Lynn Hunter
~The other Pinot Girl