When I was younger, MOB (mother of blogger) made me watch all sorts of movies. Maybe “made” isn’t the word; with one television in the house, my brother and I didn’t have much choice but to settle for whatever she and DOB (dad of blogger) wanted to watch. I recall watching many films that I initially had no desire to see because they were “old”, but ended up falling in love with. West Side Story, Urban Cowboy, and The Deer Hunter were among them. As was The Coal Miner’s Daughter. I remember I was a teenager, sitting with MOB very early on a cold Saturday morning, her wrapped in a blanket. We both sipped coffee and watched Sissy Spacek and Tommy Lee Jones give two great performances as Loretta Lynn and her husband, Doolittle. I love that memory and, oddly enough, I am reminded of it each and every time I make Spaghetti Carbonara. 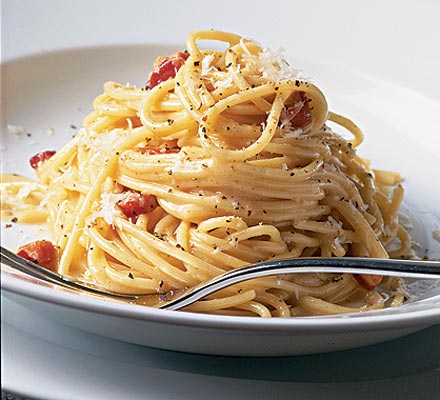 Maybe it’s the fact that Carbonara tastes great on cold days (it was a cold Saturday), or that it is made with breakfast elements (it was early in the morning), or it could be the name itself: Spaghetti Carbonara is derived from carbone, the Italian word for coal. Some believe the dish was originally made as a hearty meal for Italian coal miner’s, thus giving it the name Spaghetti alla Carbonara (coal miner’s spaghetti). Regardless of why this dish triggers that memory, it does time and time again. I first had it while studying abroad in Italy. My friends and I took a weekend trip to Rome where I ordered Spaghetti alla Carbonara from a tiny piazza café. What arrived in front of me was a dish of spaghetti coated in a creamy sauce specked with pancetta, Pecorino Romano cheese and lots of black pepper. It was sublime; creamy, cheesy with a salty kick from the pancetta and a spicy kick from the pepper. It was simple and delicious. Over the years I have tried a handful of recipes, only to be disappointed. One recipe called for heavy cream to achieve the signature creaminess of the dish…it was a failure. Another substituted bacon for the pancetta, but the finished product was too smoky for my taste. Finally, I found the perfect recipe and I reach only for this one when I get the craving for Carbonara. It is from Williams-Sonoma and is perfect.

Crack 2 room temperature eggs into a large serving bowl and add 1/4 cup Parmigiano Reggiano cheese and 1/4 cup Pecorino Romano cheese. Whisk until blended and set aside. Bring a pot of water to a boil and add a handful of salt. When it comes to a boil, cook spaghetti until it is tender but still has “bite” (al dente). While the pasta is cooking, heat 1/4 cup extra virgin olive oil over medium heat. Add 1/4 lb of cubed pancetta (unsmoked Italian bacon) to skillet and fry until the pancetta is starting to crisp. Add 2 cloves of very thinly sliced garlic. Fry for about 1-2 minutes. Add 1/2 cup dry white wine and cook until reduced by half. Remove from heat. When the pasta is done, drain and add to the bowl with eggs and cheese (you can save a little pasta water for moistening, if desired). Stir and combine the egg/cheese mixture with the pasta. The heat of the pasta will essentially cook the eggs. Add the pancetta/wine/oil to the pasta and stir to combine. Add lots of freshly ground black pepper. I also add about a cup of cooked peas. Sprinkle with salt to taste and stir.

Because the heat gently cooks the eggs, you are left with a very creamy “sauce” clinging to your pasta. I’ve found that you don’t need any bread to go alongside Carbonara. Not even a salad. Maybe just a glass of your favorite wine…I use whatever kind of wine I have cooked with which is almost always good Pinot Grigio. It is a simple, satisfying, bacon-and-egg-goodness meal that tastes best on a cold night, wrapped in a blanket, watching one of your favorite movies.