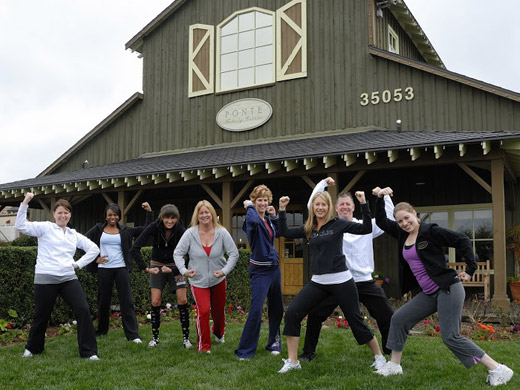 Since 1983, April has been National Child Abuse Prevention Month, a time to recognize that we all can play a part in promoting the wellbeing of children and families in communities everywhere.  Every year at this time, child abuse and neglect awareness activities are promoted across the country.  You might have seen people wearing blue ribbons lately; many people wear them in April in memory of those who have died as a result of child abuse and in support of efforts to prevent abuse.  That said, there is no better time to host our first meeting for Team Ponte!  Every year Team Ponte participates in the America’s Finest City 5K and Half Marathon in August to raise money for Rancho Damacitas, a local home for abused and neglected children.  Last year, they raised over $25,000 and are aiming to crush that number this year.  At the kick-off meeting, happening next Wednesday, April 24th at 5:30 pm, you’ll learn about how you can make a difference by joining our team, plus we’ll be offering you wine and appetizers, too.

You think you’re not a runner?  No problem.  Plenty of participants walk or walk/run the courses.  5K participants enjoy a course that takes place entirely in spectacular Balboa Park. The Half Marathon run begins at historic Cabrillo National Monument, follows scenic San Diego Bay and Harbor Island along the Embarcadero to The Star of India, winds through downtown and ends in Balboa Park.  It’s one of the most beautiful courses in the country.

Still not persuaded?  You can always make a donation…but we still want you at the meeting!  In case you think you’ll never be a bonafide runner, you may surprise yourself.  Check out Ragan’s inspiring story here of surviving a stroke and only one year later, finishing the Half Marathon.

We really hope you’ll be there!

Team Ponte Kick Off Meeting takes place on Wednesday, April 24th at 5:30 pm in the Reserve Room at Ponte Winery.  No reservations required.