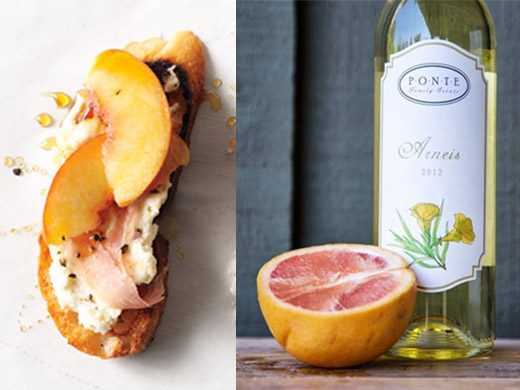 If you’re on Pinterest, like I am, and have a board designated for food alone, like I do, then it is probably overflowing with pictures of food that link to recipes that you totally intend to try “one day,” but that day shockingly never comes around.  To date, my food board has 218 pins (not that many in the land of Pinterest), of which I’ve made 40 of the pictured recipes…once I counted, I was actually surprised how many I’ve attempted.  If I don’t like the result of the recipe, I delete the pin from my board.  Food pin attempt number 40, however, will be on my board forever.

When a cousin of mine threw a “cousin’s dinner party”, she asked everyone to bring a dish and a bottle of wine.  Invitations such as this always stress me out a little; I’m thrilled for the chance to spend time with family, but then I agonize over what to bring.  After an uninspiring 20 minutes of scanning cookbooks, the light bulb went off in my head: Pinterest, of course!  I ended up selecting the very first recipe I ever pinned, waayyy at the bottom of my food board…Peach, Prosciutto and Ricotta Crostini, courtesy of epicurious.com.

This recipe is the easiest ever!  The only “cooking” involved is grilling or toasting some bread; everything else is just a matter of assembly, and the crostini is served at room temperature.  I added my own little touch by including arugula, and I think you could substitute the peaches with any other ripe, sweet stone fruit, such as apricots, or melon.  It is an appetizer that is perfect for summer time, although, I dare say I could make a meal out of this with one or two other people and a bottle of fruity, crisp white wine, like 2013 Arneis.  As for the wine I took to the party, well, I went ahead and made Clementine and Red Wine Spritzers because, hey, I’m just crazy like that.  Enjoy!

Brush each slice of bread with some olive oil and place on hot grill until golden grill marks appear on the surface of bread.  Remove from grill and spread each slice with about one tablespoon of ricotta cheese.  Lay a few arugula leaves over each crostini.  Top each with one slice of prosciutto and a few peach slices.  Drizzle each crostini with some honey and some fresh pepper.  Serve with glasses of crisp white wine.