Have you ever tasted something so good that you said, “I could eat a whole bowl of that,” or something to that effect?  Well, last night, I did.  And I don’t mean I said that, I mean I did that.

The culprit was me, but the target of my offense was a recipe given to me by my cousin: North African Roasted Cauliflower.  It’s meant to be a side dish, but as you will see, it could just as easily be your entire dinner.  I had a pretty meager meal planned of scrambled eggs.  I wanted something on the side but didn’t want to spend a lot of time preparing it.  Rummaging through the fridge I spotted a head of cauliflower and I remembered a recipe that had been given to me at my bridal shower.  Reading through it, I discovered that it wasn’t exactly a quick dish, but it was easy to prepare and the oven does all the work.  I chopped the entire head of cauliflower into florets and tossed them with olive oil, garlic, salt, cumin and coriander.  Into the hot oven they went for 30 minutes to roast.  What came out of the oven was a baking sheet of browned, caramelized deliciousness, made even more scrumptious when doused with lemon juice and topped with chopped tomatoes and cilantro.  That boring, bitter cauliflower you remember from your childhood that only tasted decent with ranch?  Say goodbye to that.  This stuff is nutty, salty and majorly addicting.  I served myself some and ate it.  Then I went back for seconds, and then I went back for the rest.  As if that wasn’t enough, I found myself scraping up all the charred bits on the pan and eating those, too.  The spices of this recipe would really compliment a white wine with some acidity and a bit of sweetness.  I think Isabel or Graciela would be ideal, but really, any of your favorite Ponte whites would probably taste delicious.

And if you are a Wine Club Member, now is a perfect time to purchase them as our Winter Whites sale is on and you’ll get 25% off some of your favorite whites through January 15th! 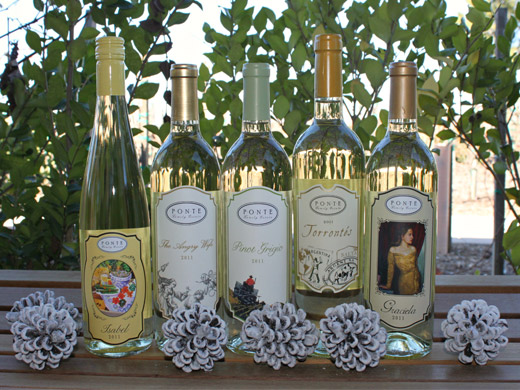 This recipe is vegetarian and vegan-friendly and is gluten-free, but even meat-eaters like me will be smitten with this exciting vegetable dish.  I know you’ll enjoy it as much as I did.  One recipe should serve 4 people…but it might only make it to 1.

Don’t forget: a number of our white wines are 30% off this month!  Check them out here.

Preheat oven to 450 degrees.  Toss the cauliflower florets with the oil, garlic, spices and salt until well mixed and evenly coated.  Place in a single layer on a baking sheet and bake until cauliflower is tender and begins to turn golden brown, about 30 minutes.  Toss halfway through cook time.  Remove from oven and immediately douse in lemon juice, giving everything a final toss.  Serve cauliflower on a platter or in a bowl, topped with the chopped tomatoes and parsley or cilantro.