Raise Your Glass to Toast

Certain occasions call for celebration. By “celebration”, I mean a nice dinner out with wine and candlelight. One such occasion is a first anniversary. 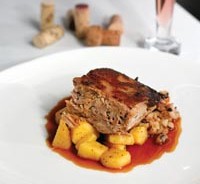 The date swiftly snuck up on HOB (husband of blogger) and I and so, just days before the big day, I was researching restaurants, reading those restaurant’s reviews and hounding my co-workers for recommendations. When our choices were finally narrowed down to 2, we decided on Toast Kitchen and Wine Bar, quite honestly because it was the 1 out of the 2 that offered a seating after the early bird-special hour and before bedtime.

We arrived early and whet our appetite with a pre-dinner drink at the bar, all the while smelling the dishes coming out of the kitchen and browsing the daily menu. Dishes such as roast suckling pig and chanterelle mushroom pasta, along with the extensive and very reasonably priced wine list made me eager with anticipation. Once we were seated, both HOB and I decided to do the chef’s tasting menu: 4 courses selected by the chef. We simply needed to tell our server of any food allergies and that was it. No specifying of how we liked our meat cooked or any of that nonsense; we were truly at the mercy of the chef… just where I like to be when dining out. The difficult part came when selecting a wine. We did forgo the opportunity to have specific wine pairings and, instead, opted for one bottle. Since our server did not know what the chef would be cooking for the tasting menu, he could not help much, but did suggest a red wine that was neither too light nor too bold: a Charbono, something I had never heard of. This red wine was tannic and had a crisp acidity, but still let the fruit shine through in a delicious, balanced way. It was much like the Ponte Tempranillo, a wine that easily stretches from appetizers through dessert without overpowering the taste of food.

Although HOB and I ordered the tasting menu, we each received different dishes, which I loved, because instead of 4 dishes, we really received 8, after swapping plates halfway through each. My appetizer was a truffled mac and cheese. Orzo pasta was swirled into a mascarpone cheese base that was studded with chopped black truffle. There are certain things that can only be described as… sublime. This was one of them. The pasta was creamy without being heavy and the truffles permeated my mouth, my senses. I did not want to take a drink of wine for fear of losing that flavor that lingered on my tongue. HOB and I were silent, and so I knew his appetizer must have also been delicious. When we each were halfway through, we switched plates and I was treated to shrimp and grits with brown sugar and habanero cheddar. The shrimp were perfectly cooked; each bite had an initial crunch followed by firm tenderness. The brown sugar was not sweet, but rather accented the natural ocean sweetness of the shrimp. And the habanero cheddar grits were a divine accent to the sweet shrimp. They burned softly, just enough to tickle the taste buds but not enough to reach for the water glass.

Truth be told, I could have had a repeat of those dishes three more times and been completely happy. But more deliciousness was to come. Our next course was a fish course. I had red snapper with smoked tomato coulis and corn. The snapper was incredibly cooked; flaky, warm and tender with the skin so crispy, it was almost airy, like a piece of puffed rice. I’m not sure how the coulis was prepared, but it had a very smoky and sweet flavor, like barbeque sauce, but not nearly as sweet or thick. The combination of the coulis and the snapper skin was amazing. I can tell when HOB likes something. His brow furrows, and he says, “Oh yeah” while looking at his plate. When he took his first bite of his dish, his brow furrowed, he said, “Oh yeah” and he did not take his eyes off his plate. And so, we switched. He also had a pan-seared red snapper but his came with tomatillos. The fish was, again, masterfully cooked. The tomatillos were very lightly seasoned and cooked just until warmed through but still plump and firm. They were lightly tangy, not sour and just the right accent to make the snapper the star of the dish. I tasted nothing but clean, pure, untainted snapper and I was in heaven. And even with something as delicate as fish, our red wine tasted delicious, never once overwhelming the food.

Next came our salad course. I was presented with a vegetarian Caesar salad with romaine, croutons and strawberries, while HOB received a beet salad with goat cheese and truffle vinaigrette. I wasn’t incredibly excited about my salad. After all, a Caesar is a Caesar. But it was very good. The romaine was crunchy and not over-dressed, the croutons were garlicky and the strawberries were a very interesting touch, and exceptionally sweet for this time of year. A genius decision making the salad vegetarian, because I’m not sure I would have liked the taste of anchovy and strawberry together. The star of the salad course, was, however, HOB’s beet salad. The only way I can describe a good beet is as “earthy candy.” They are sweet with a flavor that is reminiscent of the smell of a meadow after it rains, or the scent of damp concrete. That might sound odd, but all is forgiven when the beet is coated in truffle vinaigrette. Words of description are, again, hard to come by, but the salad was just, well… sexy. At this point, we had a lull while our meat courses were being cooked and so we just sat back and sipped our wine.

Our meat course arrived. I received pork tenderloin with whipped sweet potatoes. The tenderloin was, exceptional, flawlessly cooked and still very pink in the center. It was juicy and practically melted in my mouth. The whipped potatoes were sweet, creamy and velvety. The wine was a spot on match for pork: not too light and not too bold. HOB’s meat dish was a rare hanger steak with polenta and summer squash. This is my favorite cut of meat. It is not the most tender cut (especially if overcooked), but it is incredibly flavorful. This particular hanger steak was no exception, with the middle still very red and the polenta acting as a sponge to soak up all of those juices.

We’d reached the end of our meal, but decided to go one step further and ordered a chocolate espresso mousse. Our waiter even brought out two complimentary digestifs: a tawny port for me and a glass of dry sherry for HOB. I alternated between the mousse, the port and the rest of my glass of wine, because it still tasted great with the chocolate.

HOB and I left the restaurant satisfied but not overly full and with grins on our faces. I asked HOB when we could go back and he responded, “Next Friday is our 1 year, 1 week anniversary. How about then?”