I know it’s not a holiday, but in my house, it will be on Sunday. I’ve asked the hubby to surrender the Xbox and feed and bathe the baby so I can have three hours in front of the television because Sunday is…Oscar Night. 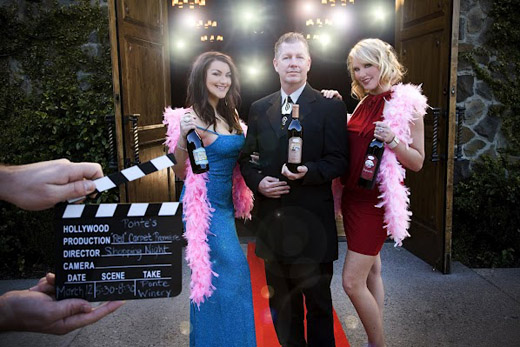 As far back as I can remember I have looked forward to the Academy Awards every year. My mom and I would wait with anticipation for the announcement of the nominees and then count down the days for the big night. It wasn’t until I moved out, though, that I began cooking up something special in honor of the awards. One year it was gourmet popcorn and homemade Raisinettes and another year it was “fancy appetizers,” a.k.a. deviled eggs with smoked salmon and caviar. This year, I want to channel my pick for Best Picture winner: The Help. Don’t think Hollywood’s most glam night needs to include caviar and champagne; you can still get into the fun by whipping up some simple, delicious dishes that echo your favorite film of the year:

The Artist – Cobb Salad with 2010 Chardonnay. The characters in The Artist, a film about the Golden Age of Hollywood, would no doubt be familiar with The Brown Derby, a Hollywood restaurant founded in the same era. Perhaps their most famous of creations, the Cobb Salad, has withstood the test of time.

Extremely Loud and Incredibly Close – Pizza with 2009 Super T. This tear-jerker takes place in the great city of New York, and what’s more synonymous with the Big Apple than pizza?

Hugo – Crepes Nutella with 2009 Late Harvest. Martin Scorsese’s sensational tale about a young boy who lives alone in a Paris railway station is pure magic. Bring out the kid in you with this French street food drenched in hazelnut-chocolate spread.

Midnight in Paris – Steak Frites with 2008 Malbec. The quintessential bistro dish for a film about Americans in the City of Lights. Don’t forget the haricots verts and baguette on the side.

Moneyball – Gourmet hog dogs with 2008 Barbera. Moneyball is a film about baseball, and what food comes to mind when you think about America’s pastime? Exactly. You could go with standard mustard and ketchup, but it’s Oscar Night! Throw some pizazz on your dog, like beer-battered fried onions and creole mustard.

The Tree of Life – Chili with 2010 Beverino. This nominee is about a man’s childhood memories of growing up in 1950’s Texas. When it comes to the Lonestar state, you might be thinking Tex-Mex or barbeque, but I think curling up on the couch to watch the Oscars with a big bowl of spicy chili and a glass of Beverino sounds awesome.

War Horse – Stilton with 2008 Zinfandel Port. For a film about World War I in England, you’ve got to have a British classic. Stinky, rich and creamy, English Stilton is dynamite with port and served with walnuts and pears.

–Do you go all out for Oscar Night? Tell us about it