Google “St. Patrick’s Day dinner” and you’re likely to find things like corned beef with cabbage, Irish lamb stew, shepherd’s pie, basically, lots of meat and potatoes. This might sound good if the weather is still cold (like it’s supposed to be in western Pennsylvania), but with the temperature topping 75 degrees this week, meat and potatoes just didn’t sound appealing. On the other hand, we did have a bit of rain, so grilling wasn’t really an option either.

What I wanted was something simple, something fresh and something satisfying, but that still said “St. Patrick’s Day.” What I came up with was a “green” omelet, Irish soda bread, and what St. Patty’s Day feast would be complete without some potatoes? I also threw in some roasted cherry tomatoes for a little color.

The Irish Soda Bread was new to me and I got started on it first. It’s a surprisingly easy bread to make. In a nutshell, Irish Soda Bread is flour, sugar, baking soda, cream of tartar, salt, butter and buttermilk mixed together, then lightly kneaded, shaped into a round and baked. No yeast, no rising. The result is an incredibly heavy and dense loaf (I’m not sure if that’s because I over-kneaded the dough). While I served it with dinner, I think it would be better suited toasted in the morning with jam and strong coffee. 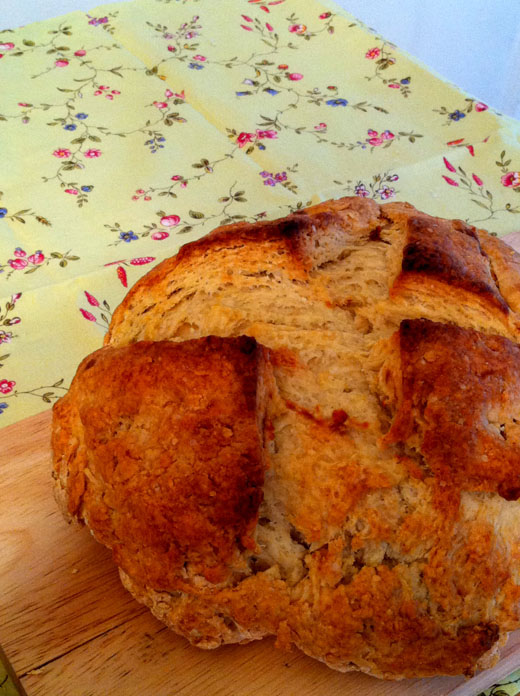 Next, I roasted my potatoes. I cut Yukon Gold’s into wedges, tossed them in olive oil, chopped rosemary, salt, pepper and garlic powder and roasted them in a 425 degree oven for about 30 minutes. I just recently started roasting potatoes at this temperature and have found that the finished tubers come out browned and crispy on the outside and very creamy on the inside.

Timing omelets can be tricky when you’re trying to serve them and all of your side dishes warm. Since I planned on cooking the eggs at a somewhat lower temperature, I started them about ten minutes before the potatoes were done. As I was heating my pan, I glanced to the right and realized I’d forgotten about my tomatoes. Luckily, they’re a breeze to prepare and only take about ten minutes in a hot oven. I quickly tossed the whole cherry tomatoes in olive oil, salt and pepper and put them in a roasting pan. They went in the oven with the potatoes. Back on track, I focused on my omelets which I filled with roasted asparagus, chives, parsley and some feta cheese (I know I should have used good Irish cheddar, but it was all I had!). By pure luck, everything was done at the same time. 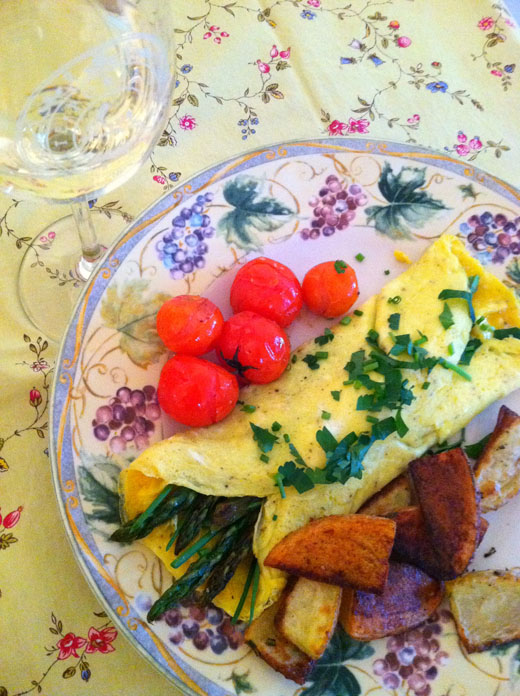 To drink, I poured Fume Blanc. I have had Chardonnay with scrambled eggs, which was very good, but I thought a nice crisp Fume Blanc, with its green, grassy notes would be nice. I was pleasantly surprised to find that the strong herb flavors from the omelet actually made the wine taste a little more crisp and slightly sweet, like green apples. Delish.

So, it wasn’t the most traditional St. Patrick’s Day menu, but I got the green in there, the potato and even the soda bread. Yes, I realize I was missing a huge element (beer), but the Fume Blanc really was wonderful.

And, I like to think I made up for my lack of tradition by having Bailey’s over ice for dessert.

Heat a non-stick pan over medium low heat. Melt butter and pour eggs into hot pan and tilt and swirl the pan, and shift the eggs until there is almost no more runniness. Right down the middle, add asparagus, herbs and cheese. Like you are folding a burrito, fold one side of the egg over the fillings, and then fold the other side over. Slide omelet onto a plate, and sprinkle more herbs over the top, if desired. Serve with your choice of sides and a glass of Fume Blanc. Makes 1 omelet.

–What do you like to make or eat on St. Patrick’s Day?