Some things naturally go together: peanut butter and jelly, mashed potatoes and gravy, arm and hammer, pork and beans, you get the picture. And other things leave you scratching your head, yet they, too, work: chocolate and bacon, strawberry and rhubarb, pasta and…orange?

I admit my eyebrow rose in skepticism when I came across a recipe for Tagliatelle with prosciutto and orange in an issue of Bon Appetit magazine, but as I read it, I became fascinated, then intrigued and finally, hungry. 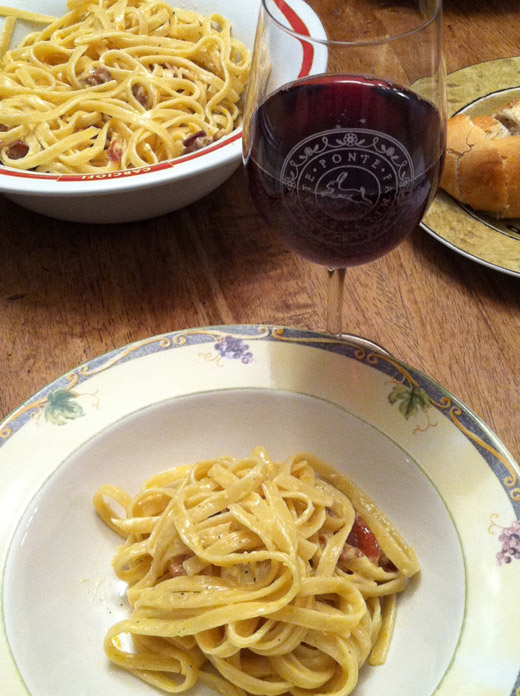 According to the recipe and accompanying article, this dish originated in the Emilia-Romagna region of Italy, aka “Land-of-no-bad-meals.” I mean, seriously, how could the home of prosciutto, Parmigiano-Reggiano, Bolognese and Balsamic vinegar be wrong?

There was one way to find out , and so it became my New Year’s Eve dinner.

The first thing I loved was that there were only a handful of ingredients. And secondly, it was ready in a flash. While the pasta boiled, I melted a little butter in a skillet and cooked the prosciutto until it browned. Then, I added a little pasta water, the juice and half of the zest of 1 orange and heavy cream and heated that until it boiled. I then added the pasta and tossed it so that each strand was coated in the silky, creamy sauce. Finally, I tossed salt, pepper and Parmesan cheese in the skillet and stirred to combine everything.

I suppose I had been anxious that pasta made with orange juice and zest would be sweet, but it was not. I could definitely taste the orange, but it wasn’t overpowering. It was a soft, citrus splash of flavor that was a delicious counterpart to the heavy cream. And the fried prosciutto was a wonderful element in keeping the dish savory. When it came to the wine, I initially thought white would be best, but, traditionally, the people of Emilia-Romagna serve Lambrusco, a slightly fizzy red with this pasta. And so, I went with chilled Beverino. Again, the pasta wasn’t sweet, but the orange element made me think that Ponte’s lightly sweet best-seller would work, an assumption that didn’t prove me wrong. Chilled, Beverino’s acidity cut through the cream, butter and cheese of the sauce, and it’s fruit forward characteristic was beautiful with the orange and smoky, salty prosciutto. HOB (husband of blogger) was even less optimistic than I was at the thought of “orange pasta” but after his second bowl, I determined he liked it.

About a week later I came across another pasta recipe with citrus: spaghetti with crab, lemon and mint. Oh yes, I’ll be making this one, too.

Tagliatelle with Proscuitto and Orange

Have you had any meals with unusual ingredients?