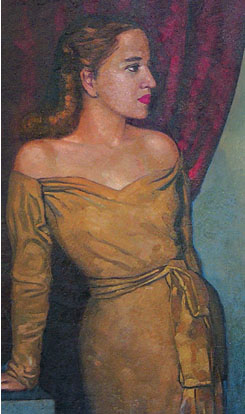 My mother Graciela was born in Colombia in 1926. Raised by a schoolteacher and a housewife, she was the sixth of eight children and the only girl. Graciela went to college in Bogotá, the capital, where she majored in journalism before completing her postgraduate studies in Madrid, Spain. Upon returning from abroad, she worked for a prominent newspaper in Colombia, El Siglo, where she wrote a daily column with interviews of interesting people, as well as many visiting foreign dignitaries. She worked at the paper until she was 30. Her seven brothers had various occupations,from an oil company executive to coffee farmer, but her most interesting brother was Julio who became one of the better known painters in Colombia. Graciela owns an extensive collection of these paintings, from photorealistic portraits to surrealistic landscapes. Examples of his work can be seen on the Graciela label (her portrait at age 19 as seen in the photo) and the Beverino label (part of a picnic series). In 1955 my mother met my father, Luigi, at her brother Jaime’s wedding. My father happened to be a colleague and friend of Jaime’s. After a year long courtship, my parents married in 1956. They had four children; I am the oldest, my sisters Silvia and Valeria are in the middle, and Roberto is the youngest. Today, she still reads a great deal and also enjoys the theater, the movies and the arts. She takes long walks to stay in shape, and spends a lot of time with her seven grandchildren. She and my father love traveling the world. Today, Graciela lives in Udine, Italy, a small city 60 miles north of Venice. Her home there is inside the historic, medieval walls that surround the city, and she is within walking distance to restaurants, shops and plazas. During the winter, she and Luigi return to their condo in downtown San Diego, California to escape the cold weather. In fact, you can often see them having lunch at the Smokehouse Restaurant on balmy days. I hope to see you at this years Mothers Day Brunch Celebration.