More About Your April Shipment 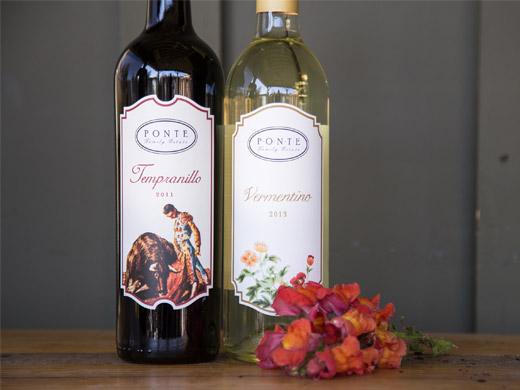 Normally we don’t get in to the nitty-gritty behind our wines.  Sugar content, enzymes, fermentation, blah, blah, blah.  This stuff is my job as well as my team’s, but you?  Your job is to pick up (or sign for) your wine, and enjoy.  But sometimes, we hear that some of you would like a more in-depth look at the wines we release.  So, for you folks, here’s some food – or drink? – for thought.

Vermentino isn’t just Vermentino.    DNA typing has determined Vermentino to be identical to Pigato of Liguria, Italy, Favorita of Piedmont, Italy, and Rollo from Provence, France.  In Europe, it grows best near the Gallura region on the island of Sardinia, Italy, where it has been cultivated since the 14th century.  Our 2013 Vermentino shows character of pineapple, peach, passion fruit, zest of lime and orange, and white flowers.  For three vintages in a row, Ponte Family Estate Vermentino has won Gold in every international contest it has been entered in.  So then, one could argue that Temecula Vermentino can rival the best in the world.  Regardless, we think our 2013 Vermentino on a warm spring or summer day will soon become a favorite of yours.

Tempranillo is Spain’s most famous and widely planted grape varietal, which can be enjoyed with all sorts of foods, from appetizers to pork loin to paella.  It is grown in the Rioja and Ribera del Duero regions of the country, and its namesake comes from the Spanish word “temprano” or “early”, as it has a tendency to ripen early.  In our vineyard, it is harvested between mid-September and early October, which is neither early nor late for our reds.  Not quite set to a train conductor’s watch, but I believe Mother Nature ripens it right on time.  Our 2011 Tempranillo exhibits mouthwatering aromas of black raspberries, black plum, vanilla, sage and caramel. It is soft and spicy with a medium to full body.

Members, you can purchase more bottles of these wines at 30% off this month in the Tasting Room, or online here.

Be sure to tell us what you think of this month’s shipment.