When I first moved away from Southern California and to the east coast, I didn’t realize what a challenge it would be to find great tasting fruits and vegetables. After all, in the land of year-round sunshine, it’s easy to find corn in November. Or Brussels sprouts in July. I expected the same circumstances in my new home state, but I was sorely wrong. Not only were out-of-season ingredients expensive, they were also fairly tasteless. I remember my first spring in Pittsburgh. I was thrilled that the long winter was over and, come April, one of my favorite summer fruits would be available in abundance: strawberries. So, I was confused, even a little angry, when I couldn’t find them anywhere once April came around. Ranting and raving to HOB (husband of blogger), I asked him what was wrong with this accursed city! (For the record, I happen to love Pittsburgh, now). He calmly, and cautiously, told me, “Honey, here, strawberries aren’t in season until June.” I could have screamed. After four winters, four springs, four summers and three falls in my new home city, I know exactly when to expect the best asparagus (May), sour cherries (July), tomatoes (August) and apples (September/October) at the farmer’s market. 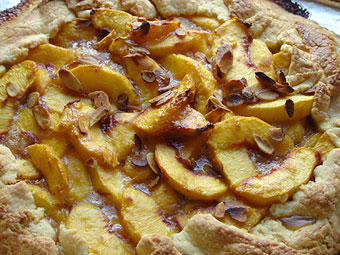 On a fine Saturday morning in August, I ventured to the market in search for what is arguably my favorite fruit ever, and what I couldn’t get until now: peaches. Again, I’d seen them here and there in June and July, but their intoxicating fragrance doesn’t call out to you until August rolls around. I left the market with over a pound of sweet-smelling peaches, a dozen local eggs, some peppery arugula and a squab (hoping to blog about this next week!). I knew exactly what I wanted to make with the peaches – a peach galette. A galette is basically a tart, but what I love about making galettes is the wonderfully rustic, misshapen form the crust takes. They always appear to have just come out of a wood burning oven in an old woman’s kitchen in France. To make the dough, cold butter is cut into flour, some sugar and a little salt. Once the mixture resembles small peas, two beaten egg yolks and a little cold water are mixed in, followed by more cold water until the mixture can be formed into a disk. The disk is then chilled for at least an hour. The peach filling consisted of peeled, sliced peaches, sugar, a touch of cinnamon, some flour and about a ¼ cup of toasted sliced almonds.

After about 2 hours, I retrieved the dough from the refrigerator; the fresh, vibrant egg yolks had given the dough a glorious, rich color. But looks can be deceiving. This dough was hell-bent on not cooperating with me. No matter how much flour I sprinkled and no matter how gentle I tried to be, the dough kept on sticking to my board, my rolling pin, everything! HOB and SSOB (stepson of blogger) cackled in the background, enjoying their Saturday afternoon playing Xbox. I, covered in flour and sweat, had visions of launching the entire ball of dough at the TV screen and letting it stick there. After much frustration, I managed to roll out the crust and place it on a cookie sheet. The peach filling was poured in and the crust edges were folded up. An hour in the oven, and the galette was done.

After dinner we sliced generous pieces of the galette and poured ourselves glasses of Isabel. I’ve always liked the peach notes in Isabel, even though I’m not necessarily a fan of sweeter wines. However, because the galette was sweet, the wine tasted more tart than usual and was sublime with dessert. The peaches were juicy and delicious. I think roasting or baking peaches brings out their flavor even more. The almonds were wonderfully nutty and almost buttery, and the hint of cinnamon was a perfect little extra kiss of flavor. What started out as a frustrating baking venture turned into a very tasty dessert. There is still a few weeks of good peaches left in the summer, but I think next time I’ll make something that doesn’t require any dough.

This error message is only visible to WordPress admins