In A New York State of Mind

“Some folks like to get away, take a holiday from the neighborhood. Hop a flight to Miami Beach or to Hollywood. I’m taking a Greyhound down the Hudson River Line, I’m in a New York state of mind”

The opening lyrics to Billy Joel’s “New York State of Mind” always take me away to my own memories of New York City. Memories like strolling through Chinatown in the winter, stopping to de-frost over a steaming bowl of dumpling soup. Or seeing my first Broadway production with MOB (mother of blogger) when I was 17, an experience that changed my perception of music and theater forever. Or eating hot buttered rolls and bialys from the corner vendor everyday for breakfast with HOB (husband of blogger) on our honeymoon. I was in one of these states of mind the other night when I decided to make my version of a New York classic, hot pastrami sandwiches, for dinner. As Billy crooned away I recalled HOB and my lunch at the famous Katz’s Deli on the Lower East Side. I pondered their Matzo Ball soup and Chopped Liver, but we ended up splitting their behemoth Pastrami on Rye. Two soft slices of rye bread surrounded an enormous pile of hot pastrami. A little mustard, some pickles, and HOB and I were in sandwich heaven. 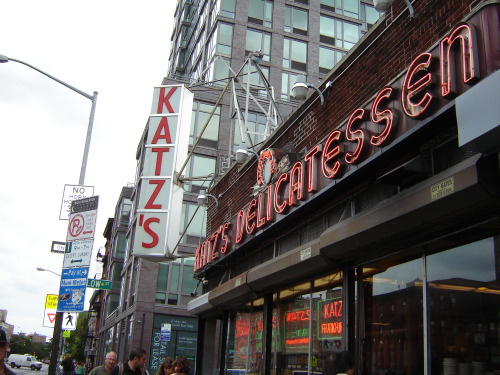 As luck would have it, HOB and I were given a copy of ‘wichcraft, Tom Colicchio’s cookbook based on his infamous sandwich shops in the Big Apple. In it, I found a recipe for a tasty-looking, New York deli-inspired imposter: pastrami, Gruyere cheese and sauerkraut in a panini. With the iPod on shuffle, I got to work preparing the sandwiches. In place of rye, I used the sourdough loaf I had just bought at the farmers’ market. I slathered brown mustard on the slices followed by cave-aged Gruyere, sliced pastrami, sauerkraut and more slices of Gruyere. I’ve found that, when making paninis, putting the cheese next to both, the top and bottom slices of bread, helps the sandwich adhere better. After about seven minutes I could hear the melted cheese start to sizzle as it dripped down on to the hot griddle plates. I placed each sandwich on a cutting board and sliced through the crispy bread into the gooey, soft center of kraut, cheese and meat. Oy vey, it looked good.

And it was good. It wasn’t Katz’s good. I’m convinced a pastrami sandwich eaten in New York tastes better than eating it anywhere else. But it was good in its own right. To drink I finished off a bottle of Super T. I didn’t know what to expect from this pairing. I figured the salty pastrami and the strong sauerkraut would be too severe with the wine, but it actually was a great match up. I think the earthiness of the Gruyere cheese and the pepper on the pastrami helped.

So, were we transported back to our memories of NYC while eating dinner? Not really. We were missing the rye. And the honking horns outside. And the throngs of people crossing the street in unison. And the lights. And the theater. And the buttered bialys. It goes on and on.