ImPORTant Facts to Know About Port

Last Friday in the Tasting Room I poured a Wine Club Member a taste of Ponte’s 2006 Zinfandel Port. “A perfect wine to finish your tasting,” I told him. Thinking our friendly conversation was just about over, as he was finishing his tastings and purchasing some wines to take home with him, I got a question that led down a path I was completely unprepared for.

“I see this is a Zinfandel Port? What is the difference between this and a Tawny Port or a Ruby Port? Which one can you cook with? How long can you age these Ports?”

The questions flooded over me; and although I was able to muster some facts I had remembered from my wine training, I couldn’t remember which Ports the facts belonged to. Slightly embarrassed, but not wanting to give the guest incorrect information I uttered, “You know, I’m not quite sure. Let’s find out.”

Now, curious myself, I ventured to where all of our wine books are located and started doing some research with my Port-inquiring guest at the Tasting Room counter. In order to help inform others who, like me, couldn’t discern between the various little 500 mL bottles, here are some important Port facts: 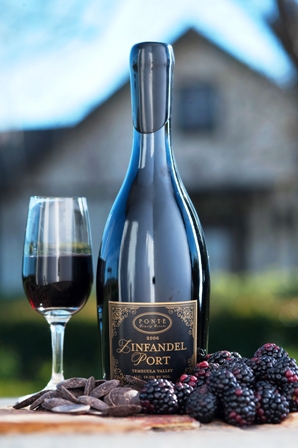 Originating in Portugal in the 18th century, Port wine is a richer, sweeter and heavier “dessert wine.” It possesses a higher alcohol content than most other wines due to the brandy that is added to fortify the wine. Fortifying stops fermentation before all of the sugar is converted into alcohol. Thus, resulting in a Port wine with 19.5% to 20% alcohol.

Now, distinguishing between a Ruby Port and Tawny Port is all a matter of time–The amount of time spent aging in barrels prior to blending and bottling.

If the quality of a Port is not deemed high enough, or the cellar has excess, it is usually released as a Ruby Port. Ruby Port is a younger blend of mulitple vintages that’s ready to drink. It has spent less time in a barrel, perhaps only a few years, retaining more of its natural ruby color, and sweet, fruity characteristics from the grapes.

Tawny Ports are wines made from red grapes that are barrel-aged in wood, exposing them to gradual oxidation resulting in a golden-brown “tawny” color. The cellarmaster blends newer vintages into older ones until he reaches a maximum level of qualtiy, which, depending on the average age of the blend can be 10, 20, even 30 or more years. Therefore, all Tawnies are given an “age.” This “age” indicates a quality level, not the maximum time spent in a barrel. So, a 30-year Tawny is “better” than a 20-year, and so on. Tawnies are fully oxidized when released and therefore can sit on your bar opened for weeks without much change. Although less sweet than Ruby Ports, the exposure to wood imparts deep, complex and “nutty” characteristics to the Tawny Ports.

Now that you’ve read this, your next thought may be, “So which one is Ponte’s Zinfandel Port?”

Ponte’s 2006 Zinfandel Port is a Vintage Port. A Vintage Port is made from a single vintage year and typically only the best years are denominated a “vintage.” Ours is made using Zinfandel grapes harvested in 2006 and aged in the oak barrels of our Barrel Room for only a couple years, allowing that sweet chocolate decadence to preserve. Although aged, Ponte’s Zinfandel Port can be drunk early. Once opened, they do oxidize and deteriorate within 1-3 days, same as any other still wine.

Our 2006 Zinfandel Port is rich and decadent and is a perfect pairing with sweet treats like chocolate, brownies or even drizzled over vanilla ice cream (hmmm…). For those cigar aficionados out there, this is the perfect after dinner treat to sip on with a cigar. The rich chocolate taste with a hint of brandy pairs quite nicely with the tinge of spice from the tobacco.

So, now you know some Port facts in case you ever get asked about the difference between Ports or the story of their origin.

Ponte’s 2006 Zinfandel can be purchased in the Tasting Room or our Online Store for $46 or $36.80 for Wine Club Members.

To read about Claudio Ponte’s trip to Portugal and learn more about this wine, read his blog.

What a good day to enjoy some wine! Which Ponte wi

We are recycling our 2020 tote bags! Buy one in th