They call it “The Windy City.” It’s famous for Oprah, Wrigley Field, Sears Tower, da Bears and Ferris Bueller’s Day Off, among other things. While I’ve never been to Chicago (layovers in O’Hare don’t count), I do know that it is arguably among the top 5 foodie cities in the country along with New York, Los Angeles, New Orleans and San Francisco. And if there’s one thing I like to think I know, it’s food. I know that the delectable mixture of cheese and caramel popcorn all shaken up together is Chicago-born. I also know that deep-dish pizza was born there, and is in a constant battle with New York over who indeed makes the best pizza pies. And, finally, I know the Chicago dog is practically an icon. I ate my first Chicago dog while waiting for a connecting flight in O’Hare airport. Hungry and pressed for time, I walked up to the first empty food counter and ordered a dog. What I was presented with was a beef frank topped with mustard, tomatoes, onion, neon-green relish, pickles, hot peppers and celery salt on a poppy seed bun. While some people might have been a little scared, I was excited. “Genius,” I thought, “to put practically a salad on top of processed meat.” The taste was savory, complex and completely delicious.

Fast forward a year and HOB (husband of blogger) says, “How about Chicago dogs?” as we’re contemplating what to make for dinner. Great idea! It happened to be the very first day of summer, and a very beautiful, sunny day at that. What could speak summer more than a hot dog dinner? I didn’t exactly have all of the proper ingredients to make true Chicago dogs:

A. Neon-green relish is not something I keep in my pantry (where would one buy that stuff, anyway?), and so I improvised with dill relish, thus eliminating the need for extra pickles.

B. I didn’t have celery salt.

And C. I only had whole wheat buns. No poppy seeds.

Regardless, dinner was ready in a jiffy. On the side HOB and I indulged in home-made oven fries tossed with a little truffle oil, Parmesan and parsley. We loaded our dogs with toppings and took great, greedy bites. The hot peppers set both our mouths on fire, but we looked past the beads of sweat developing on our brows and just kept on eating. HOB had insisted on making me an extra dog, which I was sure I wouldn’t eat, but, alas, I devoured. 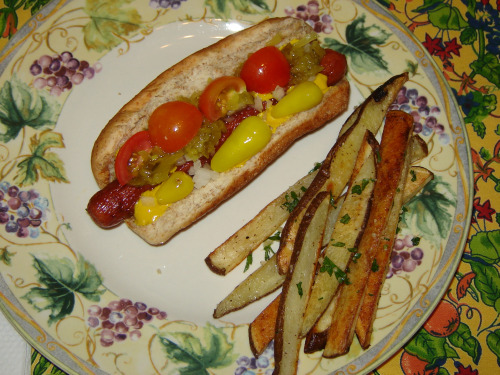 While I would have loved to discover an interesting and unusual wine-pairing with this meal, I was out of wine and so I cooled my mouth off with sparkling water instead. If I had to give some wine advice for a dinner like this, I’d say it would be vital for the wine to be refreshing, not bubbly, not bone-dry.I believe a good, cool, crisp Riesling would have been great. I suppose I’ll just have to get myself a bottle and whip up a couple more Chicago dogs.You know, just to see if my advice rings true.