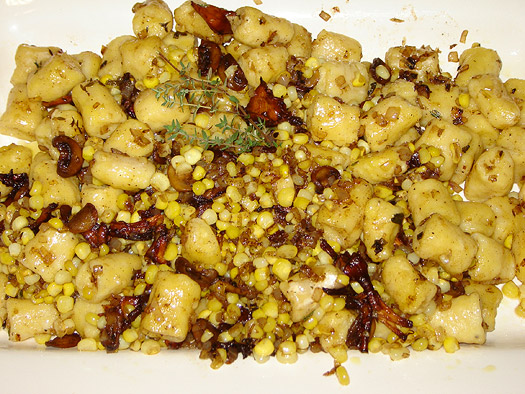 I could hardly wait to get out of work on Monday. HOB (husband of blogger) was coming home after his job took him far away for far too long. A nice dinner out would have been appropriate but HOB had been dining out daily on mediocre restaurants for nearly 3 weeks; needless to say, a home cooked meal was in order. Since he had missed out on some of the best weeks of the year at the farmer’s market, I decided to showcase some of the bounty for his homecoming dinner. On the menu: ricotta gnocchi with brown butter, chanterelle mushrooms and corn from a lovely cookbook called Sunday Suppers at Lucques by Suzanne Goin. When the workday finally ended I raced home to get started on the gnocchi. Ricotta gnocchi is made of flour, ricotta cheese and eggs. When everything is combined, a ball is formed, then cut into 4 sections, then those sections are cut in half; each half is then rolled out into a snake and, finally, 1-inch pieces are cut and shaped. Yes, it took a while. At first, I took my 1-inch pieces of dough and rolled them along the tines of a fork in an attempt to make them look pretty and authentic, but after much frustration and failure, my 1-inch pieces became 1-inch logs with no tine marks. Not very pretty, but I preferred to look at them as “rustic.” The logs were then plummeted into boiling water, drained, tossed in olive oil and set aside until the sauce was ready. It was around the time that I was chopping shallots when HOB arrived home. There was still a good 30 minutes before dinner was ready, so HOB unpacked and I continued to prep. To make the sauce, beautiful, nutty chanterelles are browned in butter and olive oil, and then set aside. More butter is melted and heated until it becomes nutty and brown, at which point a ton of shallots, fresh, sweet corn, sage and thyme are sautéed just until the corn is cooked. The cooked gnocchi and mushrooms are poured back into the pan and everything is tossed until coated. In lieu of a salad, I served a giant sliced heirloom tomato and fresh mozzarella cheese. And to drink, we uncorked a bottle of sparkling wine. After all, it was a celebration. HOB would have been happy with a homemade tuna fish sandwich and so the fact that he was ooohing and ahhing over dinner was no surprise. I agree, it was very tasty; the corn was sweet and perfectly cooked, the mushrooms were nutty and buttery, but I think the dish was just a little too heavy for summer. Had it been cold outside I think the meal would have been divine, but my little logs of cheese and flour sat in my stomach like a rock. Perhaps I over handled the dough? The tomatoes provided some relief but the real star was the wine. The dryness and effervescence cut through the butter and the heaviness of the gnocchi like a knife and my mouth was refreshed after each sip. Would I make this gnocchi again? Absolutely. But I’ll wait until the temperature drops at least 20 degrees.

The next night, HOB and I went out to dinner. Alas, it was mediocre at best.

This error message is only visible to WordPress admins