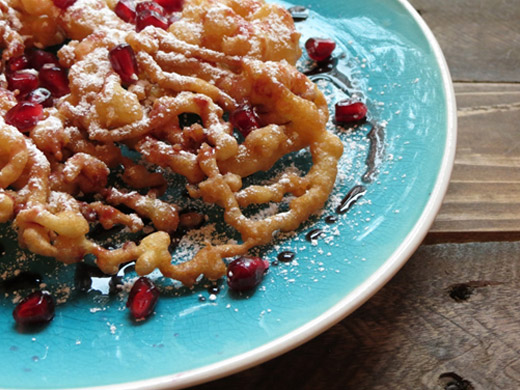 This evening, the Jewish holiday of Hanukkah begins. The Festival of Lights, as it is also known, will last for eight nights and days, with menorahs being lit, dreidels being spun and fried foods being enjoyed. “Hmm, why fried foods?” I wondered. As a Gentile I’m not well versed in Jewish customs and traditions, however, I am well versed in foods and I happen to love Jewish foods. Chopped liver…mmmm. Indeed, while researching Hanukkah menus I found a slew of recipes for latkes (fried potatoes), donuts and other fried goodness. There had to be a reason for this.

And there is. Oil is a very symbolic element during Hanukkah. You see, oil has been used in Jewish ceremonies ever since Moses led the Jews out of Egypt…we’re talking waaaay back in the time of Exodus. The holy lampstand that lay in the Tabernacle, and later in the Holy Temple of Jerusalem, was to be constantly lit using olive oil. Over the centuries Israel and its Temple were attacked, desecrated and nearly destroyed many times by various enemies. By the 2nd century B.C., Israel’s Judea region had been overtaken by the Seleucid Empire and Judaism was outlawed, with foreign gods being worshipped in the Holy Temple and Jewish tradition and ceremonies had stopped completely. A group of Jews successfully defeated the Seleucid’s and re-dedicated the Temple to its traditional practices, including lighting the holy lampstand. The problem was, there was only a small, single jug of oil in the Temple that remained uncontaminated and suitable for use. This amount certainly wasn’t sufficient to keep the lamp lit constantly for long. Miraculously, though, the lampstand remained lit on the single jug of oil for eight days. See the significance of Hanukkah traditions now? The menorah is lit for eight days and oil is a superstar.

Well, I say bravo to that. Who can argue that foods fried until golden brown in oil are deliciously crunchy, crispy and downright amazing? Potato latkes I’ve made and I love, but this year I found a recipe that fit the oil bill perfectly and included wine! Win. Fried pastries with wine syrup are a bit like funnel cakes – you mix up a batter and swirl it into a pot of hot oil until it is golden brown. The syrup is a thick, sweet wonder made with red wine, cinnamon, orange zest, sugar, a bay leaf and cloves. I boiled the syrup a little too long and ended up with candy, basically, but I added some orange juice and water to thin it out and it tasted just fine. A squeeze bottle will be your best friend while making these as it makes it much easier to swirl the batter into the oil in an even stream. Once with batter is in the oil, it takes mere minutes for the pastries to be done. Drain them on some paper towels, drizzle with the wine syrup, dust with powdered sugar and decorate with pomegranate arils. Pomegranates are in season right now so they are plump and gorgeous and totally perfect for enjoying in this recipe. 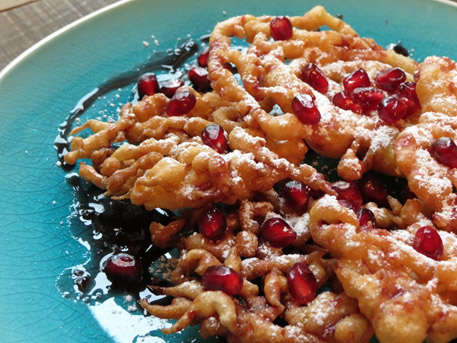 You guys, seriously, these were so tasty. Five minutes after I took photos, these babies were gone – devoured by my 3-year old and I. He attacked the pomegranate seeds and then discovered the “donuts.” Sticky fingers, happy bellies and big smiles all around. 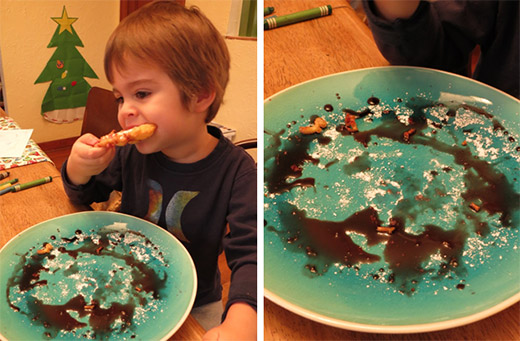 They will go fast, oh yes. My son, happy to be eating “donuts” before dinner (left); the after math (right)

While we did not drink wine with our pastries, these fried fritters would be perfect with a glass of wine. They are sweet (but not too sweet) and I think Ponte Vernaccia Nera would knock them out of the ballpark. While not kosher (none of Ponte wines are), this sparkling red wine has subtle notes of cinnamon which complement the red wine syrup beautifully. Beverino and Late Harvest would also be good choices.

To those who celebrate Hanukkah, happy Hanukkah to you! May the next eight days be filled with light and lots of great food! And to my fellow Gentiles, give this recipe a try. It is quick, easy, and made with wine, for goodness sake.

Get the recipe for Fried Pastries with Wine Syrup here