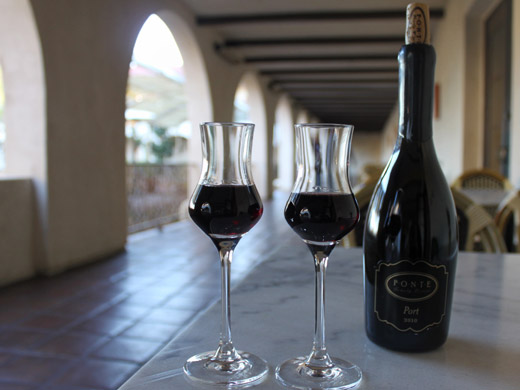 Star Trek has “Trekkies.” Twilight has “Twihards.” Harry Potter has “Potterheads.” As far as I know, Downton Abbey doesn’t have a catchy term for their super fans. All I know is that I am one of them. The runaway public television hit has had me captivated for five seasons, and as we enter the sixth and final one, I am as hooked as ever. Much has changed for the fictional Crawley family and their domestic servants since the time we met them back in 1912. In the current season, we catch up with them in 1925 when times are-a-changin’ even more. But some things have stayed the same. Take Mr. Carson, for example. The Crawley family’s faithful butler is a creature of habit, always reluctant to see and face change, preferring things in the world and in Downton Abbey to keep blissfully chugging along. As far back as I can remember, Mr. Carson keeps a bottle of Port in his office. He sips out of his tiny crystal glasses at the end of a long day, offers servants a bit while discussing difficult issues, and happily pours away in celebration of good news. It is his “any time, any day” wine and he makes it look so gloriously sophisticated.

Every time I see him hold up those delicate glasses of Port, I think two things:

Of course, a man (a butler, no less) with a British accent, wearing impeccable clothing, with every hair in place can get away with holding such a glass. Me, a work-from-home mom wearing jeans and a ponytail as her everyday getup…let’s just say I wouldn’t look nearly as chic. Not that it matters much, because what’s really important is what’s in the glass, whether that’s a Waterford crystal Port glass or a $3 Goodwill wine glass find. 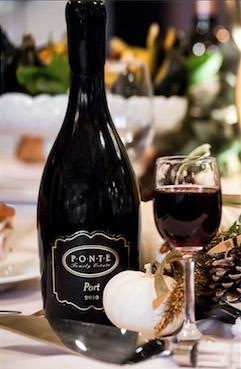 Clearly, a good Port has withstood the test of time. English butlers and aristocratic heirs ended their days with it a hundred years ago and even suburban American moms do the same today. Port is a fortified wine, which means brandy is added during fermentation. The result (in Ponte’s case) is a dark, dense red wine that is best suited as or with dessert. The higher alcohol content makes it perfect for late night relaxation. If that doesn’t entice you to try it, surely black plum, sweet fig and caramel flavor notes will. One sip, and I think you’ll understand Mr. Carson’s vice. 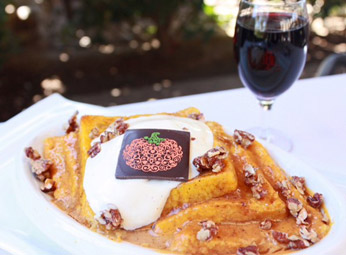 Ponte Port: great with or as dessert

Right now, you can try Ponte’s 2010 vintage of Port and their sparkling red wine, Vernaccia Nera in the Sip and Savor wine flight. Open the Port now and enjoy a tiny glass every night. Save the Vernaccia Nera for Mr. Carson’s upcoming wedding to Mrs. Hughes. Cause for celebration, indeed!