When I was 10 I had my first taste of a strawberry rhubarb pie. It was disgusting. MOB (mother of blogger) had asked AOB (aunt of blogger) to pick up a pie on her way to our house one evening, and while I had hopes of banana cream goodness, we received strawberry rhubarb instead. If I’d known then what I know now, I wouldn’t have expected much from a chain bakery/restaurant that mass-produces every flavor pie there is, no matter the season. But as a youngster, the gloppy red filling looked appetizing regardless of the fact that I had no idea what rhubarb was. The strawberry was enough to make me take a piece. I took my first and last bite and pushed my plate aside. It was thick and cloyingly sweet with a nasty grassy flavor that I just couldn’t stomach. Not even the out-of-season strawberries could save it. “Sigh, I wonder if we have any more Oreos,” I thought, making my way to the kitchen.

Fast forward 15 years and I meet future HOB (husband of blogger) who mentions his favorite dessert in the entire world is, yes, strawberry rhubarb pie. Fast forward 5 more years and I, the lover of cooking and all things baked, had yet to indulge HOB in his most loved sweet. For 5 years, spring came, the season for strawberries and rhubarb, and then spring would go, buying me another year until those two main ingredients would be in season again. This year, spring came after a terribly long and bitter winter, and on opening day of the local farmer’s market, I arrived bright and early eager to stock up on the first tender greens of the season and potted herbs. As fate would have it, my favorite vendor was offering long, ruby-tinted stalks of rhubarb at a bargain price. “It’s now or never,” I thought. Nowhere else in the city would I find this vegetable as fresh as it was that morning. Later at the grocery store I picked up everything else I needed for my first strawberry rhubarb pie. HOB didn’t know what I was up to, as he was away for the weekend and I couldn’t wait to see the look on his face when he waltzed in Sunday afternoon!

In the morning I made the pie dough, a concoction of flour, butter and not much else. While it chilled in the fridge I got to work on the filling: strawberries, sliced rhubarb, sugar, tapioca, cornstarch and a pinch of salt. Into the oven it went. As I pulled it out of the oven an hour later, HOB came trekking up the stairs. When he realized what I’d made, he was 8 years old again; giddy and repeatedly asking if it was cool enough to eat yet. We raced through dinner and dishes and HOB readied plates and forks. The pie, still a little warm, oozed pink as chunks of rhubarb and strawberry slowly tumbled out of each slice. HOB took a forkful and a slow smile spread across his face. “It’s really good,” he grinned. And he was right. The pie was perfectly tart and sweet at the same time and the buttery crust was the perfect foil. It was nothing like the gloppy mess I’d experienced when I was 10. It just goes to show you what a difference a homemade dish using seasonal ingredients can make. Just as I was about to grab a cup of coffee, I remembered my bottle of Juliet chilling in the fridge. I admit that I’m not the biggest fan of sweeter wines, but I thought there was never a better time or dessert to pair this wine with. The wine has the most wonderful strawberry flavor notes and, combined with the tart pie, it was delicious. Furthermore, I would not be opposed to pairing this pie with Moscato. Has there ever been a better combination than strawberries and sparkling wine? 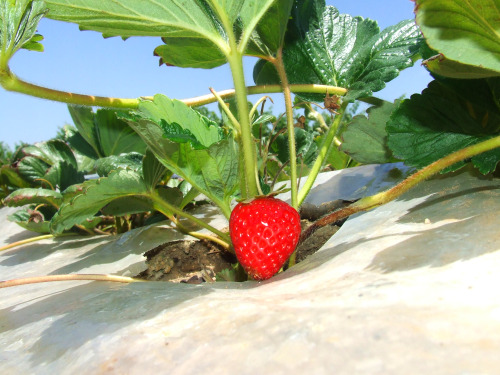 HOB was happy. He insisted the pie was outrageous, like any good husband would do, but how did I know he was telling the truth? I caught him eating a piece for breakfast the next morning. And packing a piece for lunch. I’d say that was good sign of success.