Frites, Ale and 3 Types of Moules

Ah, dinner out. In my house, going out to dinner is an occasion in and of itself. For two people who cook almost everything they eat, letting someone else take the reins for the evening is cause for celebration. The absolute worst is when the food ends up being sub-par and, before you know it, you’re plopping down an amount of money that could have fed you for nearly a week and tasted a thousand times better. Fortunately, this is not the experience HOB (husband of blogger) and I had last week at a little Belgian-café in Pittsburgh.

It was Cinco de Mayo, and while most people were out and about in the gorgeous 80 degree, sunny weather, ordering shots of tequila and munching taquitos, HOB and I were celebrating his birthday in a quiet, quaint neighborhood called Point Breeze. The Café, called Point Brugge, listed some delish-sounding dishes including mustard crusted salmon and steak frites, but we opted for Moules Frites (mussels and fries), the meal this café is famous for. A pound and a half of Prince Edward Island mussels were served with French fries, your choice of sauce and crusty French bread.

Let’s start with the fries: crunchy on the outside and completely soft and airy on the inside, these were some of the best French fries I’d ever eaten. Even better, they were served with a thick homemade basil-infused mayonnaise. So divine were they that I had half a brain to evenly split the portion between HOB and I to ensure no one would get one more than the other. But, the better half of me remembered that he was the birthday boy, so I let him have a few more than me. 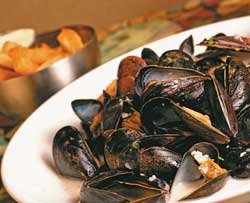 The mussels were a mound of shiny onyx jewels, glistening and steaming in a pool of white wine, shallots, garlic and cream. Each one was plumper than the last and HOB and I hardly said a word to each other, we were so busy oohing and ahhing over the delicately flavored shellfish. As if that wasn’t enough, when the mussels were gone we were left with a generous amount of sauce which we happily dunked our bread into and gobbled up with gusto. I must say that HOB and I took our servers advice and ordered pale ale and stout respectively instead of wine and both were perfect with our meal. However, upon ordering the mussels, we were asked to choose our choice of sauce. We went with the traditional sauce described above, but the two other options were a red curry sauce with coconut milk, lime juice, basil and cilantro, and a tomato sauce with saffron and fennel broth. The next time we eat at Point Brugge (which we certainly will), I can’t imagine ordering anything but a dry rose with the red curry version, or a crisp Fume Blanc with the tomato sauce.

I had to laugh after dinner was done and we strolled out of the restaurant. Out of all HOB’s Cinco de Mayo birthdays, this was the best. We’d tried numerous Mexican restaurants around the city and been at least slightly disappointed with all of them. Who knew it would take a Belgian plate of mussels and fries and not a single tortilla chip to have a truly delicious celebration?