Do You Know What This Sunday Is?

It’s one of the best food days of the year. It’s an excuse to throw all caution to the wind and eat as much as you want. It’s a day when eating in front of the TV is not only ok, it’s expected. 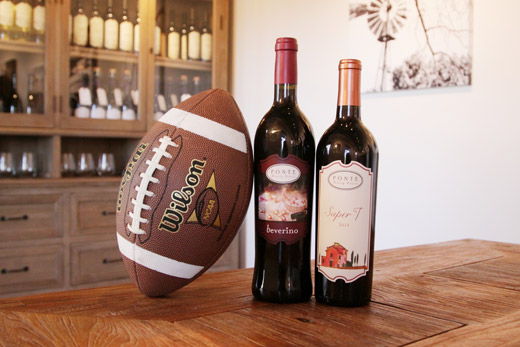 I love the Super Bowl. It doesn’t matter who is playing, I think the energy the game brings is contagious. From the National Anthem to the half time show and the million-dollar commercials, it’s just fun. And the food! Tables full of crunchy, greasy, ooey, gooey food!

This year, the New York Giants and New England Patriots go head to head at the biggest sports event of the year. As if the age old rivalry between the New York Yankees and the Boston Red Sox weren’t enough, now it comes down to their football counterparts (even though they play in New Jersey and Foxborough, respectively). I’m not particularly favoring one team over the other and so my Super Bowl cuisine ideas pay homage to each. I’m deliberately excluding things like chips, dip, salsa, pretzels and wings, or “fillers” as I call them, because they show up on 98% of Super Bowl tables anyway.

Pizza: Who can deny the presence of pizza at any Super Bowl party? Especially when New York is involved. This isn’t the time for fancy goat cheese and balsamic reduction toppings (who’s going to stop and savor the flavors when they’re glued to the TV?). Go for classic cheese or load it up with pepperoni, sausage and peppers. Wash it down with Beverino, Ponte’s best-selling, very easy to drink red that is just as delicious chilled as it is at room temperature.

Pastrami Sandwiches: Honor the celebrated delis of New York with pastrami piled high on rye with lots of mustard and pickles. This delicious, salty cured meat needs a complex wine that stands up to the briny goodness. My wine choice is Syrah, with its herb and smoke undertones.

Sesame Noodles: Inspired by New York’s famed Chinatown, I think sesame noodles would make a great side at any Super Bowl party. They’re spicy, nutty and savory all at once and taste delicious with a cool, fruity wine like Graciela.

Clam Chowder, er, Chowda: Who wouldn’t love a hot bowl of creamy, hearty New England clam chowder in February, anyway? You can’t go wrong with anything that combines clams, heavy cream and potatoes. To tame its richness and compliment the flavors, I’d suggest either Chardonnay or Viognier. Hosting a house full of Patriots fans? Don’t dare make the Manhattan version.

Lobster Rolls: This is simplicity at its best. A lobster roll is little more than lobster meat mixed with mayonnaise (just enough to hold it together), served on a toasted, buttered bun. It might be a bit of a splurge to make these babies, but you and your guests will be swooning. Very New England. Pair with cool glasses of Chardonnay.

Boston Baked Beans: No, not the candy-coated peanut kind, but the homemade dish that consists of beans, bacon, maple syrup, vinegar and a slew of other kinds of yumminess. No matter what else you serve, Boston Baked Beans will be a popular addition. With its fruity, spicy aromas and flavors, Zinfandel is great with a dish like this.

Great game, great rivalry and great food. Throw in some great friends and great wine and you’ll find yourself with one great time.

Cheers everyone, and have a safe Super Bowl Sunday!

–What will you be making this Sunday for the big game?