Croque Madame for the Soul 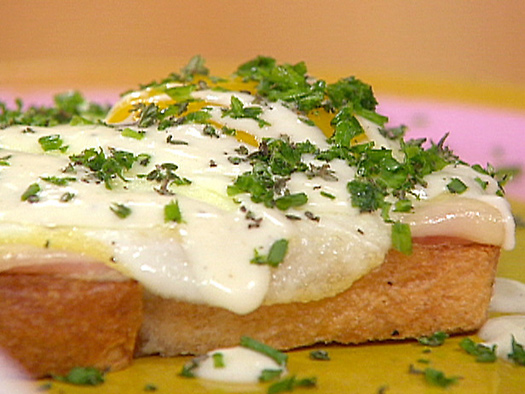 Winter came early this year to Pennsylvania. On December 1st we got the first snow of the year and it kept on snowing, and the temperature kept dropping. Before I knew it, we were going on 2 weeks straight of 20 degree weather. HOB (husband of blogger) and I are fairly settled into our new house but the new routines are still exactly that: new. I no longer have the luxury of walking to work every day but instead, I commute. And because I commute, i.e. sit in traffic to and from downtown, I get home much later. And, in turn, my cooking has greatly suffered. My experimental dishes can only be done on the weekends and I now find myself looking more and more for quick dinner recipes. Most of them have been good, but not the soul-satisfying goodness you get from a dish that’s been stewing or roasting or baking for a long time. And when its 20 degrees outside with a wind chill of below zero, you really do need something that warms the body and soul. And so, when HOB suggested Croque Madame for dinner one night, I whole-heartedly agreed. Croque Madame is a French sandwich that is warm and cheesy and heavy and comforting and…most importantly, quick. It is, essentially, a ham and cheese sandwich topped with an egg.

First, a Mornay sauce is made (this is basically a béchamel sauce with cheese). After melting 1 tbsp of butter in a medium sized pot, add 2 tbsp of flour and whisk to combine. Whisk for about a minute over medium heat. A cup of milk is then added all at once and is whisked until the mixture is thickened and just comes to a boil. Off the heat, salt and pepper is added to taste as is a pinch of nutmeg. Add 1/4 cup of grated Gruyere cheese and whisk until combined. Set the sauce aside and get to work on the assembly. Take 4 slices of good country bread and lightly toast. On each piece of toasted bread, spread a generous spoonful of Mornay sauce. Top with a sprinkling of grated Gruyere and 2 thin pieces of thinly sliced smoked ham. Top the ham with another spoonful or two of Mornay sauce. Give each toast a final sprinkling of Gruyere and place in a 500 degree oven. While the toast browns, fry an egg for each piece of toast. Be sure to keep an eye on the toast – you want the top to get melted and maybe a little brown but not burned. To serve, top each toast with an egg. What results is an incredibly indulgent meal, not for the caloric-faint of heart. When you cut into the toast, the egg yolk oozes over your sandwich, creating an even richer, thicker sauce that is just fantastic.

The entire cooking process took about 30 minutes, and that includes us sautéing a little kale with some olive oil and garlic. To drink, we had a bold Malbec, leftover from the night before. I wouldn’t normally have chosen this wine with this dish, but probably would go for a very light white or even sparkling wine to cut some of the richness, but the Malbec just added more comfort to an already consoling meal, and it was delicious.

HOB and I might as well have been in a cabin somewhere in the mountains with a roaring fire wearing L.L. Bean flannel pajamas and drinking hot cocoa, that’s how comforted we were that night.