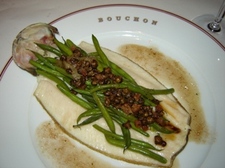 During a trip to Napa Valley last winter I had the pleasure of dining at Thomas Keller’s Bouchon restaurant. Arguably the best chef in the country, and to some, the world, Keller is also the man behind the infamous French Laundry restaurant-#1 on my list of places to dine at before I die-and Per Se restaurant in New York City. If you’ve read my blogs, you know I’m a foodie. And for most foodies, simply hearing the name, Thomas Keller, is enough to get the heart pumping a little faster. Simply put, I was ecstatic about visiting Bouchon.

The French-inspired Bouchon menu was a drool-inducing wonderland of French dishes-pates, French cheeses, charcuterie, seafood, foie gras, etc. Always one to order dishes I would rarely make at home when I’m dining out, I selected the Truite Grenobloise or pan-roasted trout with hericots verts, lemon, capers and brown butter. As soon as I took my first bite, I knew I’d want to re-create it a home and so I took a mental inventory of the ingredients. The fish utterly melted in my mouth and the brown butter offered a savory nuttiness to the dish. The capers and lemon satisfied the tangy and salty element and the hericots verts were fresh and tasty, if not drenched in butter. But, hey, that’s the French for you. I believe, however, that all that butter was the culprit behind me being the fullest I’ve ever been after a meal…and maybe the profiterole I had for dessert had something to do with it.

Fast forward four months and I am at home in Pittsburgh. FOB (friend of blogger, blogger being me) walks in the door with two freshly-caught trout in tow. He begins spouting out ideas he has for dinner using the catch but I quickly retort, “Oh, no. We are doing nothing with that trout if it doesn’t include brown butter, capers, lemon and green beans (unfortunately, haricot verts can be hard to find out here).” FOB concedes.

I suppose the moment I knew we were in for trouble is when FOB attempted to butterfly the trout so that it would lay flat. Note to readers: if you plan on butterflying anything, use a very sharp knife. We did not have a very sharp knife and so what should have been a few graceful, smooth slices became violent sawing motions, intertwined with some very colorful language. When they finally were as flat as could be, I decided to de-bone the filets. As luck would have it, I couldn’t find my trusty fish bone pliers. Shrugging, I suggested we suck it up and cook as is; so what if we’d have to maneuver the pin bones out of our mouths in-between bites? 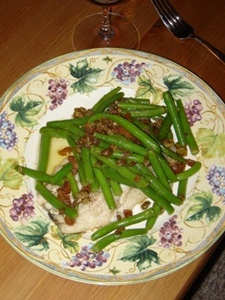 The rest of the dish went off without a hitch; I browned the butter (although I did try to cut the amount down), added capers, lemon juice and tossed in blanched green beans and toasted bread crumbs. When it came time to eat, we uncorked a bottle of chilled Ponte Fiorella and dug in. Eating the dish was much more difficult than actually cooking it. Every bite of fish contained a healthy number of pin bones and so chewing was a drawn-out process. Halfway through mine, I dismissed all table manners and ran my fingers over the remaining trout in order to pick out the remaining bones, one by one. FOB did not follow suit and his dinner was intertwined with more very colorful language as he attempted to avoid swallowing the sharp bones. It was a long meal, and I must say, Keller’s heavily buttered version tasted much better than my own (as I knew it would). The wine was a success, however. A dry rose, the Fiorella neither overpowered nor got lost in the flavors of the dish.

So, I learned a couple of things here: one-rose wine is a knockout with fish. Two-when you have an excellent meal created by one of the world’s greatest chefs, don’t try to equate yourself in their superhuman talent. Just enjoy the memory.

*Photo note: The image at the top is Truite Grenobloise at Bouchon in Yountville, CA. The image on the bottom is the dish re-created at home in Pittsburgh