Cooking in the Gnudi 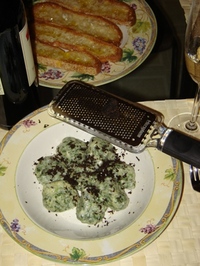 “Gnudi”: pronounced “nudie” with a “nyah” emphasis on the first two letters.

This week marks a pivotal moment in my time as a foodie. A little over 24 hours ago I cooked a meal that contained truffles–not the chocolate ones but the real mccoy. It doesn’t matter that they were imported from the faraway land of Oregon, what is important is that they were, in fact, truffles. I’ve loved truffles for a long time but I had learned to love their flavor through truffle infused olive oils and cheeses and, on one occasion, through a jar of preserved truffles smuggled in by my mother from Paris. I had always been aware that the truffle is synonymous with haute cuisine but I didn’t know the extent of that until I saw real Perigord truffles (the ones from France) being sold for $1,400 per pound–seriously. After seeing this I knew it would be a long, long time, if ever, that I would get to experience a real one.

Lo and behold, FOB (friend of blogger, blogger being me) found these little Oregonian gems in my local supermarket and snatched them up faster than you can say “holy cow, that’s a real truffle!”. And at $12.95 per pound, who could blame him?

The recipe we chose to make to showcase our star ingredient was from Williams-Sonoma’s Florence cookbook: Gnudi di Ricotta e Spinaci al Tartufo, or, Ricotta and Spinach Dumplings with Truffles.

FOB and I were giddy with excitement. FOB even picked up a bottle of champagne on his way home to celebrate. Okay, so we were also celebrating his new job.

Gnudi is essentially ravioli filling without the pasta. It’s similar in texture to gnocchi, the Italian potato dumplings, but it’s made with ricotta cheese, eggs, Parmesan cheese, flour, salt and pepper. In this case, it also contained chopped spinach. The dough is rolled into balls and cooked for a few minutes in boiling water and the result is a lighter-than-air, cheesy dumpling that simply melts in your mouth with goodness.

Once the gnudi finished cooking, I tossed them in a bit of melted butter and FOB was standing close by with a cheese grater in one hand and a truffle in the other. He liberally shaved that truffle all over the hot dumplings. I was surprised at the taste of our dish. The truffle tasted nothing like the infused oils, cheeses and preserved versions I’d had in the past. Instead of that earthy, sensuous flavor that I’d known truffles to have, I tasted what was more similar to a mushroom. Granted, truffles are fungi, in the same family as mushrooms, but the deep, unmistakable truffle flavor was not there. Was I disappointed? No. I wasn’t going to let anything ruin my first real truffle experience. Besides, the dumplings themselves were delicious and I just grabbed my bottle of truffle oil from the cupboard and dropped a few drops over my gnudi. FOB did the same.

To drink, we had a red table wine–somewhat ironic considering the champagne and the truffles but nevertheless, the wine had one superior quality: it tasted good. It was very similar to Ponte’s Beverino–light, easy to drink and full of red fruit flavor. It was just another example that good wine doesn’t need to cost a bundle to be enjoyed and served with a great meal. I think the humble nature of the wine brought FOB and I back down to earth. Yes, we ate truffles and drank champagne but the former was from Oregon and the latter was Korbel. But, man oh man, we sure did feel like royalty, even if it was only for one night.