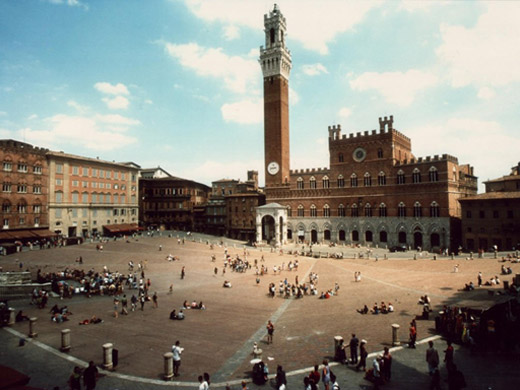 A typical afternoon at the Piazza del Campo in Siena, Italy

Today, July 2nd, the city of Siena in Italy is bursting with people.  Locals and tourists alike jam the Piazza del Campo wearing bright colors and waving the flags of the contrada (or city district) they will cheer for.  At approximately 7:30 in the evening, an explosive will detonate and echo across the plaza, signaling to the thousands of onlookers that the centuries-old Palio di Siena is about to begin.

The Palio di Siena is an annual bareback horse race that began in the year 1656 and is held twice each summer, the first on July 2nd and the second on August 16th in Siena, Italy.  Ten horses and riders represent ten of the seventeen contrade in the city.  Today’s Palio is named Palio di Provenzano in honor of the Madonna of Provenzano, who has a church in Siena.  The race circles the Piazza del Campo three times and usually lasts no more than 90 seconds.  The “track” is uneven and treacherous with sharp turns and it is not unusual to see jockeys thrown from their horses, or the horses themselves taking hard falls.  The winner is the first horse to cross the finish line – with or without its jockey – and the loser is not the last horse to cross, but the unfortunate fellow who comes in second place. 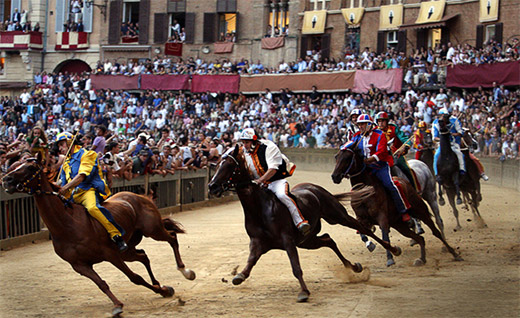 As a college junior studying abroad in Siena in 2001, I learned about the Palio almost immediately after my arrival there.  First, I learned what contrada I lived in (Leocorno, or Unicorn) and that I had no choice but to remain loyal to that contrada as long as I had an address there.  Although I knew I wouldn’t be in the city at the time of the July 2nd Palio, I learned that thousands upon thousands of people would swarm the city on the morning of the event and that the race is preceded by a pageant of epic proportions which includes flag wavers in medieval costumes and sword-wielding carabinieri (police officers) on horseback.  The crowds are so tight that injuries upon spectators are not at all uncommon when the horses come rocketing around the steep bends and corners.  As a winner crosses the finish line, a sound rivaling a sonic boom (and maybe even World Cup vuvuzelas) erupts from the onlookers in the plaza as they cheer, hug and shout with enthusiasm.  The citizens of the winning contrada will then celebrate their victory for a solid month.  What a summer that would be. 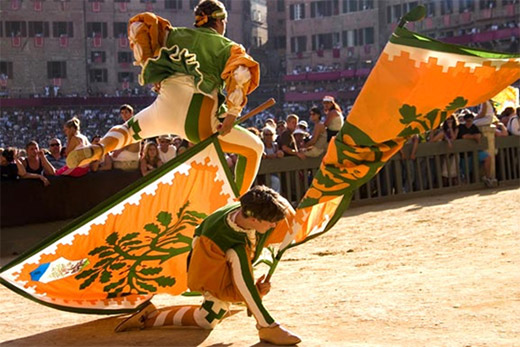 One thing I learned living in Siena is just how loyal its citizens are to their individual contrade.  I’d compare it to how Pittsburgher’s feel about the Steelers and the Penguins – it’s fierce.  And do they ever know how to have a good time!  One evening, my professor, Grissiano, took my classmates and I to his contrada dinner, the Tartuca (tortoise) contrada.  The late afternoon sun was sinking and the city dazzled in a golden glow as we walked through the streets.  I was delighted to arrive at a narrow side street, lined as far as the eye could see with long tables that overflowed with bottles of wine, baskets of bread and plates ready to be filled.  We sat for 2 ½ hours and ate pasta, pizza and drank lots of red wine.  I remember, it was Chianti.  There was talking, laughing, singing and sighing.  There was no particular reason for this dinner; it was just something the people of Tartuca wanted to do.  Can you imagine what it’s like when they have something big to celebrate? 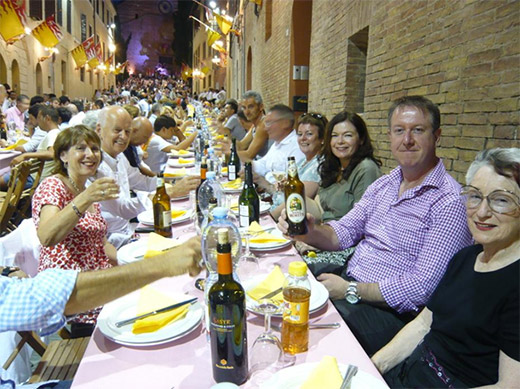 Yes, July 2nd always brings big waves of memories from my time in Italy.  I remember the Palio is taking place thousands of miles away in the city that was briefly mine.  Then, other memories are triggered from that time in my life: the trains, the traveling, the struggle to communicate (and sense of victory when I could), the gelato, the friends, the food, the wine!  Those four months instilled a life-long love in me for Vernaccia di San Gimignano and Brunello di Montalcino wines.  I remember thinking how wonderful they were the first time I tasted them.  When I think about my first sip of Vernaccia, I remember sitting down to a homemade dinner in my tiny apartment with the new friends I’d met in class.  I can still hear the sounds of the Gallo Nero restaurant that I lived directly above.  I remember how difficult it was to make that dinner on my miniscule stove, but in the end, everything tasted fine and the Vernaccia went quickly.  I don’t remember the flavor notes of that first 1997 vintage of Altesino Brunello I drank, but I remember tasting it on a hill in Montalcino.  There were villas and vineyards below in the distance.  I brought a bottle of it all the way home to America with me, hoping those I’d share it with would experience the same joy that first sip had brought me.   I remember the countless bottles of Chianti my Italian and American friends and I drank sitting in the Piazza del Campo as the nights drew on.  People played guitar, read and studied, other people flirted in broken English. Somewhere between midnight and 2 am, most of us finally retreated back home.  It was the time of my life. 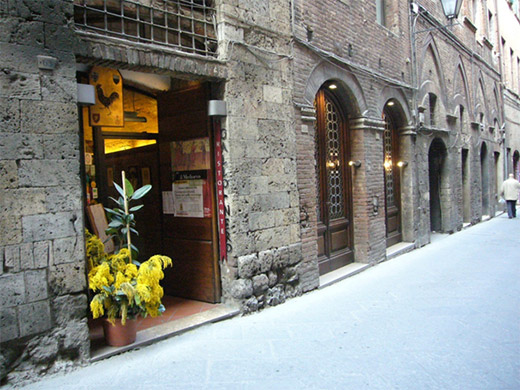 Gallo Nero restaurant on Via del Porrione.  I lived right above this eatery.

While we can’t promise you horse races or vuvuzelas at Ponte, we can assure you that our goal is and always has been to help make a great memory for you.  Everyone who walks through our doors should have our signature day in the country experience, whether that’s through a great bottle of Ponte wine, a fantastic lunch, a stroll through our vineyards, a romantic night at our hotel or a combination of these things.  A day at Ponte may not be as heart-stopping and enthusiastic as what’s happening today in Siena, but it should make you walk away smiling and eager to return.

We hope to see you soon.