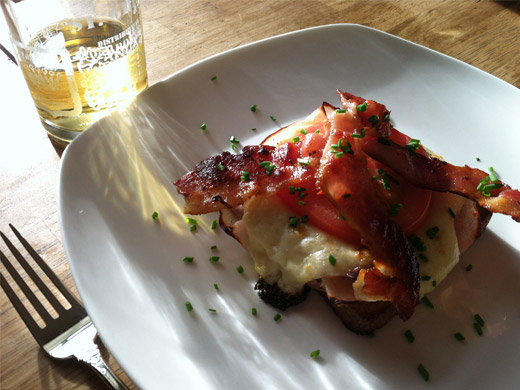 If you were to ask 10 people what they are doing this weekend, my guess is that at least 5 would be doing something to celebrate Cinco de Mayo.  Yes, May 5th has become synonymous with Mexican food, Mexican beer and lots of margaritas.  It is certainly what I thought of when planning out today’s blog.  But after a few minutes Googling “events in May” I discovered another exciting occasion is happening the very same day: The Kentucky Derby.  Big hats, fancy dresses, fast horses and mint juleps.  Herein lies my dilemma: what to blog about?  A short game of eeny-meeny-miney-mo solved my problem: Derby Day, here I come.

Recipes that originated in Kentucky are many.  I found no shortage of desserts made with bourbon and pecans like Derby Pie, and there were fascinating dishes such as Burgoo (a thick meat and vegetable stew), Benedictine (a sandwich spread made with mayonnaise, cream cheese and cucumber), and one recipe that caught my eye as both easy and tasty: the Hot Brown.

This open faced sandwich was originally created at the Brown Hotel in Louisville, Kentucky in 1926.  It consists of turkey, bacon and a Mornay sauce over toast, broiled in the oven until browned.  Sometimes pimentos or tomatoes are added.  There were a lot of recipes to choose from for this sandwich, but fortunately, the Brown Hotel itself offers the original recipe on its website.  After reading it, I knew exactly why the Hot Brown has withstood the test of time: it calls for 2 cups of heavy cream to make the cheese sauce!  Two things I knew for sure: this dish would be incredibly indulgent and delicious, and it would probably be smart to make it no more than once a year.

It is really an easy meal to put together.  The cheese sauce is just butter and flour cooked into a thick paste called roux.  The healthy dose of cream is then whisked in and cooked for a few minutes before Pecorino cheese is added.  To assemble the sandwiches, take toast, top it with slices of turkey breast, sliced tomato and your cheese sauce.  (I strayed from the recipe here.  I put my tomato slices on after it was broiled).  Broil.  Remove from the oven and top with crispy bacon.

Now, if I’d have had bourbon in the house, I’m sure I would have mixed myself up a cold Kentucky cocktail, but since I didn’t, I poured a glass of Chardonnay to drink with dinner.  A meal like this needed something to cut through the rich sauce and bacon, and while the wine did this, it also had nice buttery, woody tones to compliment the richness.

You know, if you’re celebrating The Kentucky Derby and you’re already indulging in Juleps and Chocolate Bourbon Pie, you might as well go for broke and try this recipe.  It’s outrageously delicious and oh-so-southern. 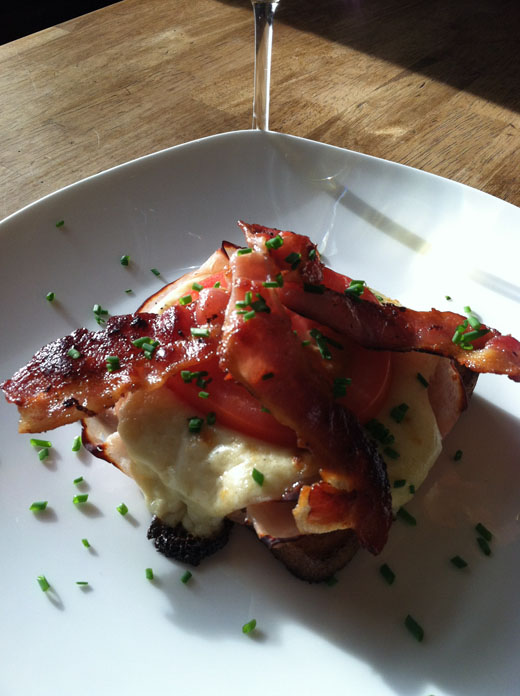 Adapted from The Brown Hotel

In a two-quart saucepan, melt butter and slowly whisk in flour until combined and forms a thick paste (roux). Continue to cook roux for two minutes over medium-low heat, stirring frequently. Whisk heavy cream into the roux and cook over medium heat until the cream begins to simmer, about 2-3 minutes. Remove sauce from heat and slowly whisk in Pecorino Romano cheese until the Mornay sauce is smooth. Add salt and pepper to taste.

For each Hot Brown, place one slice of toast in an oven safe dish and cover with 7 ounces of turkey. Take the two halves of Roma tomato and set them alongside the base of turkey and toast. Next, pour one half of the Mornay sauce to completely cover the dish. Sprinkle with additional Pecorino Romano cheese. Place entire dish under a broiler until cheese begins to brown and bubble. Remove from broiler, cross two pieces of crispy bacon on top, sprinkle with paprika and parsley, and serve immediately.

–How are you celebrating Derby Day or Cinco de Mayo?