“NO, NO, NO FOURS”, I heard Grace Lee (our accountant and one of our partners) holler from her office. It was 2003 and I was on the line with Verizon, trying to get a phone number for the almost finished winery. Grace convinced me to get something with eights instead. Turns out the number eight is considered auspicious in Chinese culture because it sounds similar to the word for ‘prosper’ or ‘wealth’. It is pronounced like “bah” in Mandarin.

2011 marks our winery’s eighth anniversary and, coincidentally, is also the year of the rabbit; a good luck sign for the Chinese and our beloved mascot at Ponte. Since our opening we have been very lucky to welcome so many of you to the winery and to see our business prosper. We have shared eight vintages, hosted many events and seen the restaurant evolve from nothing to a real wine country restaurant. Grace might think it was the phone number but I know that it has been you, our loyal Wine Club Members, who have made all the difference.

A quick Internet search revealed that the 8th anniversary is celebrated with bronze and pottery gifts, so I guess that will give us some ideas for the finishing touches on the Inn and its gardens.

For the rest of the year our main focus will be the vineyard (so far it looks like it will be a good vintage) and installing new equipment in the winery. We’ve purchased an Italian Enoveneta press, a few tanks, plus the usual complement of French, American and Hungarian oak barrels.

I hope to see you all at the Grape Stomp Festival in October. Until then, please stop by for wine tastings or a bite to eat at the restaurant. Cheers! 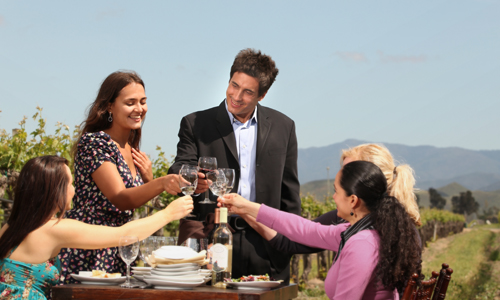