Boxed Wine: Worst Nightmare or Way of the Future?

You are about to enter another dimension, a dimension not only of sight and sound but of mind.  A journey into a wondrous land of imagination.  Next stop, the Twilight Zone! – opening monologue of The Twilight Zone television show

Boxed wine has been around for as long as I can remember.  And, for just as long, it’s been the butt of many jokes and the disdain of countless aficionados.  Why the stigma?  Supposedly, the stuff is nasty – the epitome of “cheap wine”…at least that’s what all the wine snobs say.  Then again, these are the same folks who swore that putting screw caps on wine was borderline blasphemous.  Well, screw caps have come a long way, baby, and are topping some very upscale wines nowadays.  Even Ponte is experimenting with them on a handful of their white wines. Despite the general attitude that boxed wine is wretched, it’s still around; someone is buying it up and the market is growing.  Perhaps these folks have had it right the whole time, despite the laughs and finger-pointing.  The New York Times, Forbes and Real Simple magazine, to name a few, have sung their praises about boxed wine.  Clearly, it’s selling and it’s not going anywhere.

Boxed wines: the wine of the future?

The major upside of boxed wine?  Virtually no air exposure.  And that’s huge for wine.  Boxed wine is actually wine-in-a-bag-in-a-box.  Inside the box lies a bag full of wine.  The bag eliminates space for air to occupy, so the problem of oxidation practically disappears.  Boxed wine has the ability to stay fresh for weeks after it’s been opened.  No open bottle of wine – including those topped with vacuum sealers – can compete with that.  Another plus?  A large number of these boxes come in 5-liter sizes!  That’s more than six standard bottles of wine.

My only experience with boxed wine goes back to my time as a college junior, studying abroad in Italy.  One afternoon I went to the university’s cafeteria for lunch and, as I made my way down the line, I spotted one of the beverage options: wine.  It made sense; I was in Italy, after all.  However, the wine offered came in a box.  To the swift eye, it looked like a child’s juice box, but printed in bold letters were the words, “Vino bianco,” white wine. Talk about a head-scratcher. Boxed wine in Italy?  Of course, I grabbed one (how excited I was that, as a 19-year old, I could drink alcohol legally!).  It wasn’t baaaad.  But it wasn’t great, either.  Needless to say, I didn’t come back to America as a boxed wine convert.  As someone older and now wiser (I hope!), who’s done some research, I think I’m ready to pick up a box of wine and give it a try.

In my opinion, boxes of wine will never replace bottles of wine.  There is a certain romance a bottle of wine carries with it, a romance no box will ever be able to touch.  I mean, can you imagine hosting a romantic dinner for your dear one: candles are lit, china is spotless, wine glasses are on the table…and a box of wine is kerplunk! sitting next to the roast beef!  No no, I’ll always have a beautiful bottle of Ponte Cabernet Sauvignon or Vermentino around to do that job. 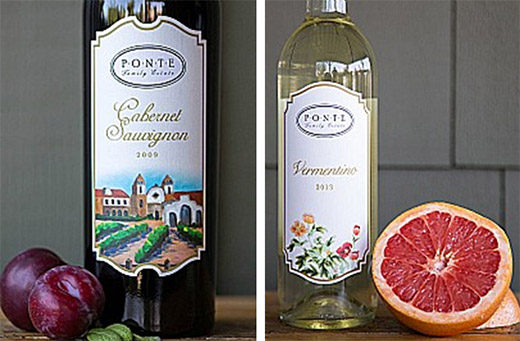 But, who knows where the next boxes of wine are going to show up.  Perhaps Temecula Valley…that “no air exposure” thing is pretty cool.

–What’s your take on boxed wines?