My husband is predestined to have Mexican food for every birthday for the rest of his life.  Why?  He was born on May 5th – good ‘ol Cinco de Mayo.  Not that he’s complaining.  An Ohio-born and bred guy, he spent 4 years in Southern California where he developed an obsession with tacos, enchiladas, menudo, tamales, and every other yummy Mexican dish you can imagine.  So, two weeks ago, it really was a rhetorical question when I asked him what he wanted me to make him on his birthday.  “Mexican food,” he said.  Surprise, surprise.

After much consideration I had my menu set: carnitas tacos, grilled Mexican-style corn on the cob, a Mexican chocolate birthday cake and sangria. 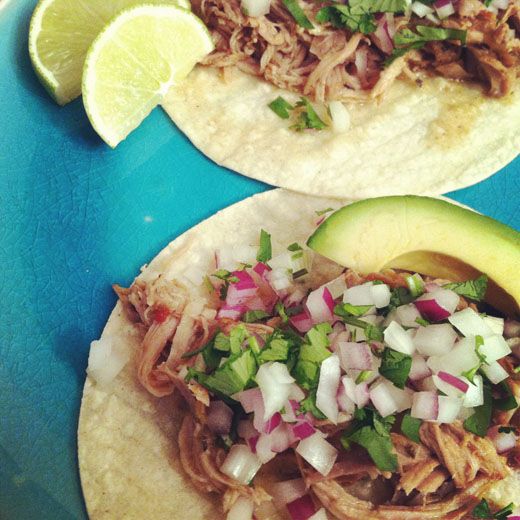 I love the carnitas recipe I found.  The hardest part was putting everything into the crockpot, that’s how easy it was.  Into the pot went a pork shoulder roast, salt, pepper, oregano, cumin, olive oil, onion, garlic, 1 chipotle pepper in adobo sauce, a sliced orange and a half can of cola.  I set the cooker on low and forgot about if for 8 hours.

Grilled Mexican-style corn will change the way you eat your corn.  Say goodbye to butter and salt because this is so good you’ll never want your cob any other way again.  Simply grill corn and slather it with a mixture of mayo, garlic, lime juice and cilantro before sprinkling with cheese (see the recipe below). 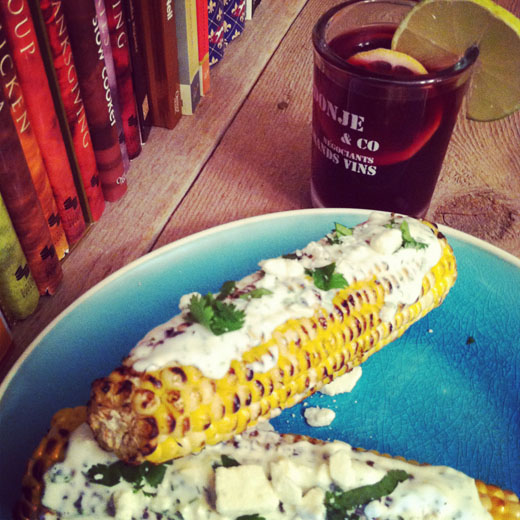 When it came to dessert, it had to be a birthday cake and I thought a classic chocolate one with chocolate frosting would be appropriate.  But it just didn’t scream “Cinco de Mayo,” so I improvised.  I took my inspiration from Ibarra chocolate, a childhood favorite of mine.  Ibarra are rounds of tightly formed sugar, chocolate, cocoa nibs and cinnamon which are meant to be dissolved in hot milk to create a creamy, sweet and spicy beverage.  I took my chocolate cake recipe and added ¾ teaspoon of cinnamon and ¼ teaspoon of cayenne pepper, for a little extra something.   Next time, I’ll try putting in a full teaspoon of cinnamon and a touch more cayenne. 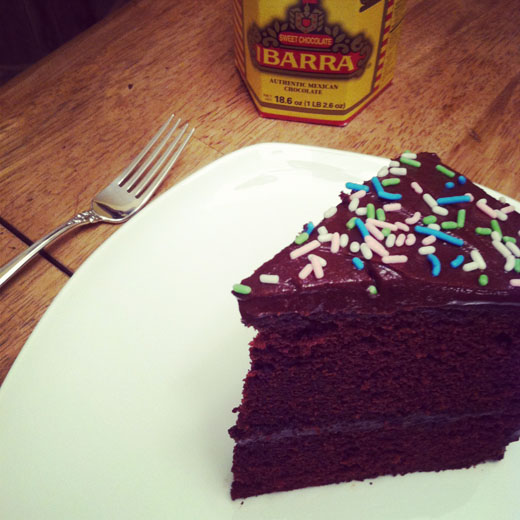 Finally, a festive beverage was in order.  I’d never used Ponte Winery’s classic Sangria recipe, and I liked the fact that it didn’t call for any additional booze like brandy or rum, something many recipes do.  I used a medium bodied Tempranillo and combined it with freshly squeezed orange juice, some sugar, a lemon and an orange and let it all marry overnight.  It came out delicious.  Not too sweet, with the red wine flavor still shining through.

Although it was a busy day for me, it was all worth it to see my husband have a great birthday.  After his fifth taco, third ear of corn and piece of cake, I was pretty sure he was telling me the truth when he said everything was delicious.

Combine mayonnaise, lime juice, cilantro and garlic in a small bowl and mix until combined.  Taste and adjust flavors to your liking.  For example, you might want a little more garlic or lime juice.  Set aside.

Place corn cobs on a hot grill until they are warmed through and the kernels become browned and slightly charred.  While still hot, spread mayonnaise all over corn and sprinkle with cheese.  Serve with extra lime wedges, if desired.  Serves 4.

*If you can’t find cotija cheese, you can substitute any dry, crumbly, salty cheese such as ricotta salata or feta, or even parmesan.