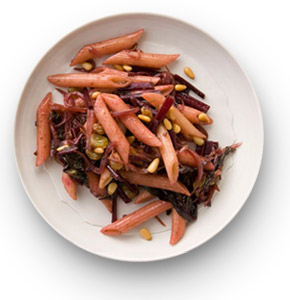 When I was young I was a pretty good eater. What was set on the table in the evening was dinner and that was that. And so, I ate, without question, without complaint. Of course, there were plenty of things I loathed that were put on that table: peas, rice pilaf, mushrooms and the notorious dish called Celebration Spaghetti – pasta covered in a tomato sauce packed with vegetables. The funny thing is, I rather enjoy all of these things today. The same is true with beets. I don’t remember my family ever having real roasted beets, only the floppy, shiny, blood-red canned ones and I hated them. I can’t recall exactly when I decided to give beets a second chance, but it was definitely within the last 7 years and today, I adore them. Red, yellow, striped… they are all wonderfully sweet and earthy and absolutely divine when roasted and then topped with walnuts and blue cheese.

Recently, I came across a recipe that was so unusual, I just had to try it. Yes, it was beet based, but instead of utilizing the actual beet, only the stems and leaves were used. Intriguing. The dish was penne pasta with beet greens, raisins and olives. Lots of garlic is cooked down in olive oil before sliced red onions are added and cooked until soft. A generous amount of balsamic vinegar is then added followed by beet stems and water. When the beet stems are soft, golden raisins and beet leaves are added until the mixture is cooked down and the greens are wilted. At the end, cooked penne pasta and chopped black, brined olives are added. The whole dish is then topped with toasted pine nuts. The result is a gorgeous, hearty pasta dish, stained pink from the beets and red onions. I thought the addition of olives was strange, but they added a salty element that was otherwise lacking in the dish. The beet stems were soft and sweet, along with the raisins, and the beet greens were savory, hearty and delicious. The pine nuts added a little crunch and a yummy toasty flavor. To drink, I had Beverino, which was undoubtedly the best wine choice for this pasta. The sweetness of the wine played up the sweetness of the beet stems and onions, while that tiny hint of earthiness I always get from Beverino was a perfect complement to the greens.

As we are coming in to fall, I am certain I’ll make this very autumn-tasting meal again and maybe play with the ingredients a bit, like adding roasted beets, walnuts and substituting the olives for a very sharp and nutty cheese. As far as the wine goes, I’m pretty sure I’ll stick with Beverino.