Aren’t You Glad We Use Grapes?

In the 11 years Ponte Winery has been open and operating, nothing catastrophic has happened on our estate grounds.   No fires, collapsing structures, or zombie apocalypses.  Sure, there have been some corked wines and uncomfortable confrontations with very thirsty guests, but, hey, at least we don’t have to worry about our grapes escaping the de-stemmer and attacking anyone.

Some “vintners” in China can’t say the same.  Recently in the city of Foshan in China’s South-Eastern Guangdong province, chaos ensued when poisonous cobras used to make wine escaped into the city.  Uh-huh, snake wine, as in whole snakes are infused into rice wine or grain alcohol. Apparently, drinking snake wine dates back more than 3000 years in China to the early Zhou Dynasty.  It is believed that the snake’s venom, which is diluted in alcohol, becomes a health tonic that can restore the body’s natural balance.  Hmm, well heck, the mayo clinic said red wine was good for health…wonder what they’d say about this?  Alas, as of now, snake wine isn’t legally permitted in the United States.  Darn. 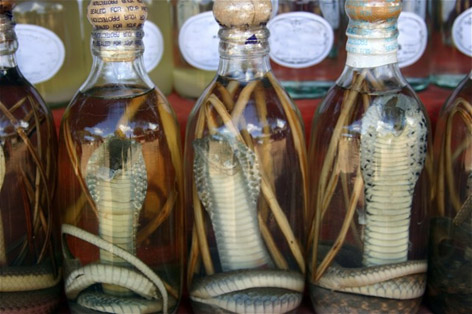 Have you had your dose of snake wine today?  Photo credit

Residents of Foshan fled their homes and hysterically cried for help as the deadly serpents – about 150 of them – creeped their way out of the area where they were being held by a snake wine distiller.  But who could blame them, right?  The owner of the snakes apologized for the incident and will have to pay a fine as well as cleanup costs that the event incurred.   Well, we’re glad that’s settled then.  Read the full story here.

But, seriously, can you even imagine!?  While the concept of snake wine isn’t new to me (or anyone who watches any Anthony Bourdain show), I found myself both laughing and gasping when I read about this incident.  And then it got me thinking…what other unusual things are people making wine out of around the world?

First of all, the word “wine” itself really only refers to those wines made with grapes.  According to Merriam Webster’s Collegiate Dictionary, wine is defined as, “the fermented juice of fresh grapes used as a beverage.” So, I suppose that snake stuff isn’t really “wine” per se.  Serpentaceous horribulus alcoholic fermentaceous potation, perhaps?  Yeah, that sounds good.  But who’d buy that?   Same thing goes for the rest of the so-called “wines” I found on the internet that folks around the world are drinking.  For the sake of this blog, we’ll call them “wines” even though, you know, they’re not really wines:

Fruit wine – nothing shocking here, most Americans know and perhaps enjoy sipping alcoholic fermented juice, ahem, wines made from apples, cherries, blueberries, you name it.  They are considered sweet  for the most part.  I had the pleasure of tasting a friend’s homemade apple wine this year.  Christmas in a glass!

Dandelion wine – I’d not heard of dandelion wine until I moved out east.  Fans of it swear by the vitamins and minerals it offers and apparently it’s quite easy to make at home.  You just need a whole lot of dandelion flowers, some water, sugar, yeast and some citrus fruit.

Basi – originating in the Philippines, Basi is a fermented drink made with sugarcane, plus other barks and leaves.  It is sweet, sour and bitter.

Toddy – sometimes called Kallu, Toddy is palm sap wine that is commonly found in India, South East Asia and Africa.  It can be served within 24 hours of being made but does not have a long shelf life, becoming more sour and acidic the longer it sits.

Makgeolli – This fermented rice wine has been consumed in Korea for generations and is only recently becoming more readily available. Served in a cup or small bowl, it is white and cloudy and closer in style and alcohol to beer.

All of the beverages listed above are just as much about culture as they are about tasting good.  I imagine Koreans will open up a bottle of Makgeolli over a business deal or an engagement announcement just as we uncork our Syrah’s and Moscato’s here in America.  Why do we use grapes?  Simple: they grow well in Temecula Valley.  They are plentiful, the weather is just right for them and people seem to like the wines that we produce from them.  These are probably the same reasons you’d get if you asked an apple “wine” maker or a Toddy “wine” maker why they use what they use to make their drinks of choice. 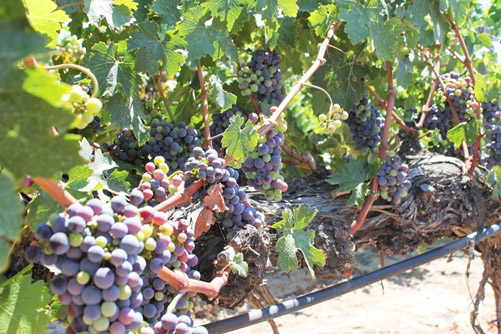 Why do we use grapes?  They grow well here, plain and simple.

If you have never been wine tasting in Temecula wine country, we urge you to come visit Ponte any day of the week to see what grapes grown in Temecula can become…that is, real wine.  We are open daily from 10 am to 5 pm.  Learn more here.

Taste what else Temecula can grow and stay for lunch!  Our restaurants use local, seasonal, farm-grown ingredients.  Make your reservation here.