Are you into Arneis? 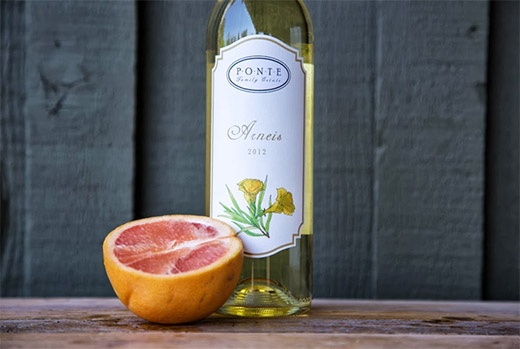 We’ve heard that some of you opened up your October shipment only to be surprised by the mysterious white wine lying next to your bottle of Super T.  Actually, Arneis has been at Ponte for a while now.  Thing is, most of you haven’t seen it in a shipment yet.  Last December the majority of our Wine Club received a magnum of Zinfandel in their shipment, however, Members of our Whites-Only Club got Arneis.  It’s not that we’ve been hiding it from you, but we will say that Arneis is produced on an extremely limited basis.  Why?  It’s a stubborn grape to grow!  The Arneis grape is naturally low in acidity and has a tendency to get overripe if it’s harvested too late.  But what is harvested and made into wine is simply wonderful.  Naturally, our Wine Club Members get first dibs of all our wines which is why our 2012 Arneis is being sold exclusively to Members.  If you haven’t had the chance to open your bottle yet, know that it is a medium-bodied white wine with crisp character and floral highlights.  The flavors of nectarine, ripe pears and a bit of grapefruit shine when Arneis is served slightly chilled.  It is a wonderful choice to serve with some of autumn’s favorite dishes like butternut squash soup, roast turkey and pumpkin-filled raviolis.  It’s also delicious with any kind of seafood.

–But enough from us, how do you feel about our Arneis?  Please let us know in the comments field!

To join our Wine Club (the only way to enjoy Arneis!) click here

For more info about Arneis and to order, click here