There are two reasons why my favorite part of my job is visiting other wine regions. First, it’s the only work I know that feels like a vacation. Second, I have yet to visit a wine country that is not beautiful and full of interesting people.

Wanting to take a few days off after Christmas, I called American Airlines hoping to use a bunch of frequent travel miles that expired at year end. But where to go? After learning that flights to Italy, France and Spain were completely booked, I asked the agent what was available. She said Sweden, Ireland and Portugal. And that’s how I “decided” to visit Portugal. Little did I know how lucky I had been: Portugal is awesome.

After visiting the capital city of Lisbon for a couple of days, my companion and I took the 4-hour bus ride to Oporto, a beautiful city located where the Douro River meets the Atlantic. Porto, as the locals call it, was the highlight of the trip. First, we went across the river to Villa Nova de Gaia where all the best Ports in the world are aged and blended prior to worldwide distribution. There are literally scores of nineteenth century brick Port warehouses (called Lodges) perched on the hillside above the river. All the famous brands are advertised on the roofs and facades of their Lodges: Calem, Sandeman, Quinta do Noval, Dow’s, Fonseca, Taylor’s and so on. 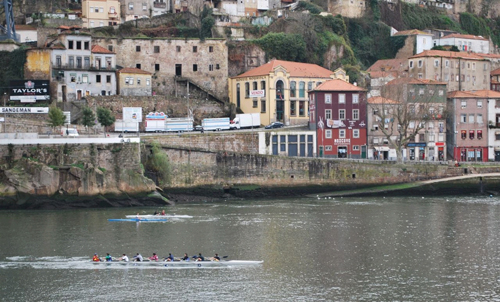 After a Bacalao lunch (salted cod) on a quaint riverside restaurant, we went wine tasting at Calem and Vasconcellos. After informative but somewhat formal tours of the barrel rooms we got to taste some of their 10 and 20 year Tawny ports. Excellent!

The next day we hired a driver and drove 60 miles east to the Douro Valley viticultural area where ports are actually made. After the wines are fortified with grape brandy they are transported by truck to the Lodges in Porto for blending and ageing. Originally, this 60 mile trip was done by sailboat and the barrels were placed on the top portion of the outside of the ship while the skippers negotiated the rapids. The Douro area is huge, several times larger than California’s Napa wine country, and the vines are planted on very steep hillsides, on man-made terraces. I shudder to think what it would cost to do that here. Quintas, the actual wineries located within the different estates, dot the countryside. We stopped at Pinhao’s Vintage Hotel for lunch, and after admiring the magnificent painted tiles that adorn the train station, we started our return to Porto in heavy rain. A couple of days later, we were braving a Santa Ana wind on the drive back from LAX.

What did we learn? First, Portugal makes Tawny ports that are simply impossible to match here. Their 20, 30 and 40 year wines are, in a word, sublime. Their vintage ports are in many cases better than ours and in some cases, frankly, about the same as ours. Their prices reflect this and I feel that we offer fair value for our product. We learned that vintage port must be drunk once the bottle is opened, and that it ages when properly stored. The aforementioned 20, 30 and 40 year Tawnies, on the other hand, do not age. In other words, storing a 20-year bottle for 10 years does not turn it into a 30-year. Once you buy the “age”, you are buying a certain quality standard. A 30 is better than a 20 and is, therefore, more expensive. Some ruby ports are good, some are just OK…they may be an acquired taste.

As we start ageing our future 10, 20 and 30 year ports to turn them into Tawnies (don’t hold your breath), we thank you for your support and hope to see you at the winery soon.