A Recipe for Hanukkah 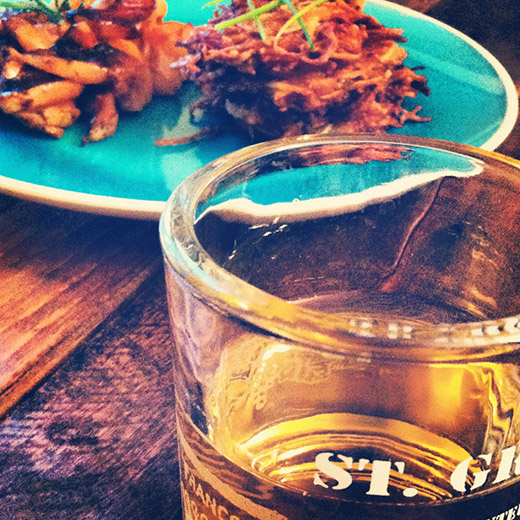 As someone fascinated by both Judaism and world food cultures, you can bet that this Gentile makes it a point to cook up something Jewish when Hanukkah rolls around.  One year I made chopped liver and another year I tried my hand at blintzes.  However, neither one is traditionally eaten at Hanukkah, so this year I wanted to do it right.  Enter: Potato Latkes, or fried potato pancakes.

First a little history of Hanukkah:  Also known as the Festival of Lights, Hanukkah is an eight-day celebration that commemorates the rededication of Jerusalem’s Holy Temple in the 2nd century B.C.  Prior to this, the Seleucid Empire had taken control of Israel’s Judea region, defiling the temple and outlawing many Jewish customs and religious practices.  Although not the holiest of Jewish holidays, Hanukkah is still widely celebrated around the world.

Why potato latkes?  In a nutshell, oil is a very symbolic element during the holiday.  Way back in the aforementioned century, when the Seleucid’s were defeated and the temple was rededicated, only a small, single jug of oil remained uncontaminated and suitable for use in the temple practice of lighting the holy golden lampstand.  There was only enough oil to keep the lamp lit for one day, yet miraculously, it remained lit for eight days.  Therefore, foods cooked in oil are traditionally eaten during Hanukkah.

I love this recipe with a crisp white wine, one with a good amount of fruitiness, like 2011 Vermentino.  It’s important to note, though, that Ponte wines are not kosher.

So, whether you celebrate Hanukkah, or are just a foodie like me, I think you’ll like this simple, delicious recipe.  It’s fried potatoes for goodness sake…how could you go wrong?

Adapted from Eat This Book by Tyler Florence

Ingredients for the Latkes

Ingredients for the apples 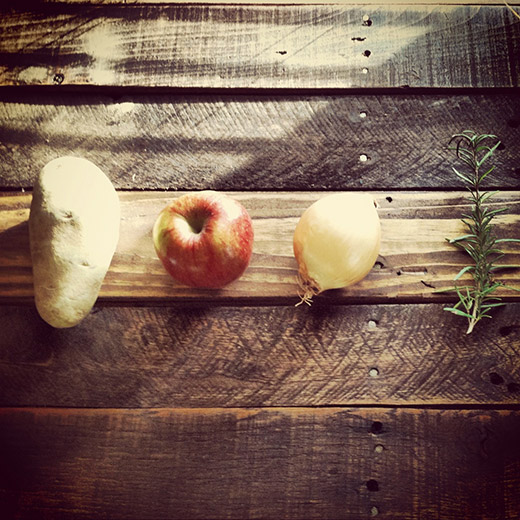 First, make the apples: Put all the ingredients for the apples into a pot over medium-low heat and cook, uncovered until the apples soften and the water evaporates, about 20 minutes.  Take the pan off the heat and let cool while you make the pancakes.  Remove the herbs before serving.  (As you might be able to see from the picture, my apples turned out a little caramelized.  This is because I accidentally forgot about them while I was tending to baby, so the water completely evaporated and began to cook the soft apples.  They still tasted pretty good.)

It’s important to dry out the potatoes and onions if you want a nice, brown crust on the latkes.  To do this, first coarsely grate the potatoes and the onions with a box grater or a food processor.  Put the vegetables together in some cheesecloth or a tea towel and squeeze out as much of the liquid as possible.  Then, dump the vegetables into a large bowl.  Season with some salt and pepper, add about 4-5 chopped chives and mix to combine.  Fold in the egg whites so everything is bound together.  Preheat your oven to 200 degrees.  Heat about a ¼ inch of oil in a large nonstick skillet over medium heat.  Drop about 2 tablespoons of the potato mixture into the hot oil and use a spatula to gently flatten it into a thin pancake about 4 inches in diameter.  Add more pancakes to the pan, without overcrowding too much.  Fry for about 3-4 minutes per side or until they are golden brown in color.  Carefully lift the pancakes out of the pan and let them drain on a paper towel-lined pan.  Season with a sprinkling of salt while they are still hot and place them in the oven to keep them warm while you finish making the latkes.  Serve with the cinnamon apples.

–What is your favorite international food?