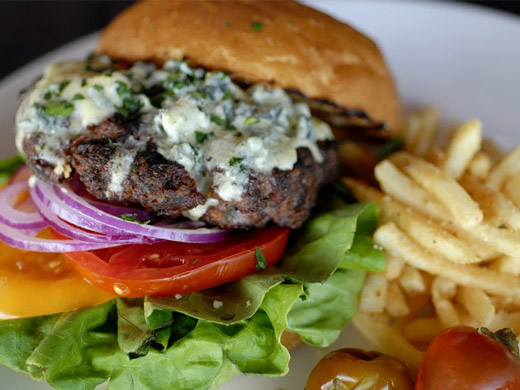 Talk about a subjective topic!  With thousands of topping options – not to mention the argument of what meat/meat mixture is best – this is one subject that will be debated until the end of time.  I’ve had hamburgers in my life…lots and lots of hamburgers.  Good ones.  Bad ones.  Tiny sliders and hamburgers the size of my head.  It’s funny, though, how only a mere few really stand out in my memories.  Here they are in no particular order: 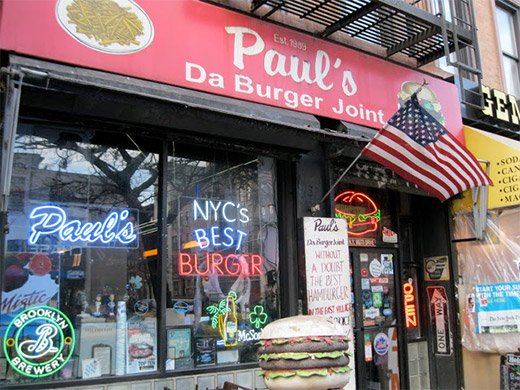 My family and I were vacationing with friends in The Big Apple one very hot July.  One evening, our large group ventured downtown to see Bring In Da Funk Bring In Da Noise; we were early, hungry and had no idea where to eat.  Someone in the group pointed across the street to a colorful burger joint with a bright neon sign claiming to have “NYC’s Best Burger.”  Yeah right.  All nine of us shuffled inside and miraculously found a seat (albeit some at the counter, some at various tables).  The place was small, with checkered tablecloths and loads of signs on the walls.  The menu was straight-forward on the side of being boring.  “A burger topped with American cheese,” was the description for their cheeseburger.  I selected “A burger topped with blue cheese.”

As I was sitting at the counter, I was able to witness my exhilarating-sounding burger being made.  My eyebrows perked up when the heavily-tattooed cook formed my patty from a fresh mound of ground meat (no frozen, pre-formed burgers here).  It was anything but a perfect circle, but its gnarly form sizzled nonetheless on a well-seasoned griddle.  I was fascinated when he placed a metal thingamajig completely over the patty to let it essentially steam.  After flipping it, ink man took a handful – yes, a handful – of blue cheese and placed it on the patty, and again smothered it with the thingamajig.  After a few minutes he placed that heaping, glorious mound of meat and blue cheese on a bun with little more than a slice of tomato and some lettuce.  The result was just…heaven.  I mean, the juiciest hamburger I’ve ever eaten, and THAT CHEESE! (131 2nd Avenue NYC, New York, people.  Go, just go) 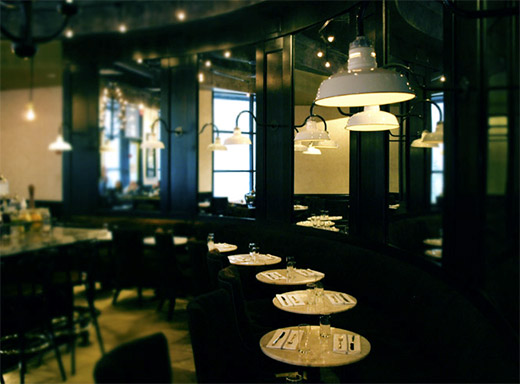 About a month after my son was born my parents traveled across the country to visit us and their new grandson.  When they asked my husband and I if we wanted to have a date night while they babysat, I answered in about .0001 seconds, “Uh, yeah!”  I’d been reading about a new, trendy restaurant downtown called Meat & Potatoes which we both wanted to try.  I mean, it’s a gastropub that specializes in prohibition-era cocktails and serves bone marrow – what’s not to love? So, off we went with (hurray!) no diaper bag, no bottles, and our cellphone volumes on high.  Once there, we ordered some snazzy drinks and looked over the menu.  I wanted absolutely everything but I kept going back to the Mushroom Burger.

This was no ordinary hamburger topped with button mushrooms.  The bun was a seeded brioche roll, the meat was…well, I don’t know what the mix was, but it was juicy and perfectly pink in the middle.  The mushrooms were mixed and wild, there was truffle oil and caramelized onions and it was all drowning in gooey melted Taleggio cheese.  Every bite tasted like the first bite.  I can’t quite remember, but I’m almost positive I didn’t even let my husband try it.  Totally mind-blowing, especially with the glass of Cabernet I had with it!  Since then, the likes of Rachel Ray, Gordon Ramsay, Eric Ripert and Anthony Bourdain have dined at Meat & Potatoes and raved about it so I’ve a feeling it’s not going anywhere anytime soon.  Thank goodness! 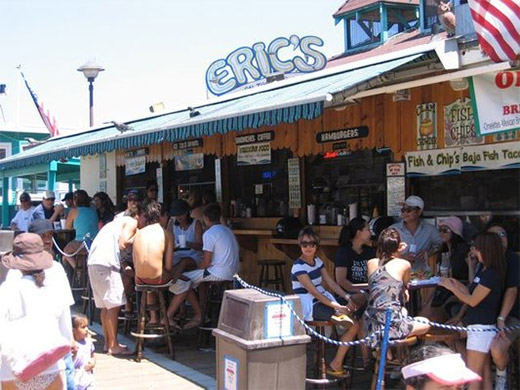 Eric’s On The Pier. Photo credit

There’s a little town on a little island 26 miles across the sea from Long Beach, California…it’s called Avalon and my heart is there.  Growing up, my family and I (plus numerous cousins, friends, aunts, uncles and grandmothers) vacationed here every summer.  It’s the kind of place where you really don’t do much except wake up, head to the tiny beach, sit there all day, go home to your tiny rental house, make dinner and head back into town at night for a cappuccino or ice cream.  Of course, that’s not all.  There is snorkeling, paddle boarding, kayaking, numerous tours, a giant and historical movie theater, beach bbq’s, etc.  In a nutshell: it’s the perfect vacation spot.  So many, many memories were made there and one particular memory is a treat called the Harvey’s Combo Burger at Eric’s on the Pier.

Eric’s is a walk-up eatery on the Green Pleasure Pier.  It’s always busy and it’s a bit overpriced, but the beer is plentiful and icy cold and they make this burger.  It is a modest hamburger topped with mustard, onions, pickles, cheese and a beef hot dog that’s been split down the middle and grilled until hot, hot, hot.  That’s it – no tomato, no lettuce, no special sauce.  And I know it’s not just the nostalgia talking; the Combo Burger is truly delicious.  Every time we brought someone new to the island, my family insisted that they try this and, so far, everyone has loved it.  Living on the east coast, now, it’s hard to get to Catalina, although my husband and I and our kids were able to go last summer and it was magical, as I knew it would be.  When we go back, whenever that might be, I know a Harvey’s Combo Burger will have my name on it.

I’ll never be able to re-create any of these at home…I’m not even going to try.  They are all so perfect in my memories, anyways, and I wouldn’t risk tarnishing those.  In contrast, in the summertime I do the typical burger: store-bought ground beef, lettuce, tomatoes, cheddar cheese, ketchup and mustard.  Occasionally, I’ll caramelize some onions or fry some bacon or sauté some mushrooms.  And the wine I drink?  Red, always red with my burgers.   All in all, though, I wouldn’t call any of what I’ve made “the perfect burger.”  That title goes to the three aforementioned masterpieces.

So, what about you?  In your opinion, what makes the perfect burger?
–Erica Martinez