A Girl and A Grill 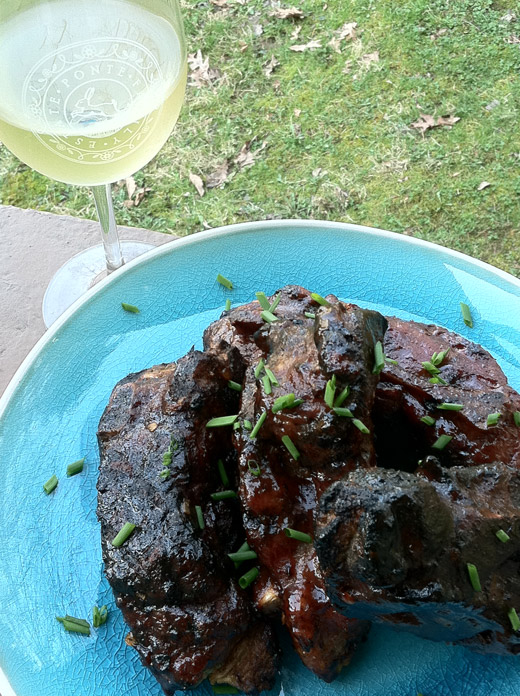 Just because it was a Monday doesn’t mean it wasn’t a good time to grill. As far as I’m concerned, the grill does not get days off during the work week if it’s 75 degrees outside and sunny, and especially if that temperature is 30 degrees above the average.

While I had the ribs, I had no barbeque sauce. However, I did have a bottle of root beer. I had heard of bbq sauce made with cola, so there had to be a recipe out there using root beer, I figured. A quick Google search proved me right. On the stove, I brought root beer, ketchup, orange juice, apple cider vinegar, honey, garlic and some other herbs and spices to a boil, then lowered the heat and let simmer for 20 minutes.

HOB had told me to brown the ribs over high heat and then cook them low and slow over low heat. I’d never made ribs on my own before and insisted he give me specific instructions, but then again, I assumed he would be home by the time they browned up and I wouldn’t have to worry about them anymore. After seasoning the meat with salt and pepper I placed them on the hot grates. I closed the lid and went inside the house, returning to the grill every five minutes or so to check the ribs. When they were almost fully browned, I was inside measuring rice when I smelled the smoke. I turned and looked at the grill outside and saw bright flames. Uh oh. I ran outside, threw open the lid and my ribs were being engulfed in orange.  After turning the heat down and moving the ribs from one side of the grill to the other, the flames died down and I was relieved to see that only a couple small pieces had a substantial amount of char. That was when I heard the smoke alarm go off in the house. Running back inside, I grabbed the broom and fanned the alarm until it was silenced. That was when the baby started crying. Scooping him up I then went around the house and opened up the windows. So much for HOB being home on time.

Baby and I then went outside, ensured our ribs were fine and went back inside to take a breather. A good 45 minutes to an hour went by before I thought they were done and ready to be slathered in sauce. Within this time frame I had flipped them every ten minutes or so. Four or five times, I coated each rib in sauce, closed the lid for a few minutes and then painted on another layer of sauce to coat and caramelize. HOB drove up just about the time I was taking the ribs off the grill, lucky him.

The moment of truth: biting into a sticky, sweet, smoky rib, all I could do was watch HOB’s face. “Pretty good,” he said.

Granted, it wasn’t “delicious!” or “amazing!”, but I was happy. In all honesty, they were good, but I think I could have taken them off the heat 5 to 10 minutes early and they would have been better (there were a few dry corners). The sauce itself was very different and very good. The root beer added a spicy quality but it wasn’t too sweet. It had a pleasant tang from the vinegar and ketchup. I would have loved to drink a glass of Syrah to go along with the flavors of the ribs, but all I had was Fume Blanc. I didn’t expect the pairing to be great but, you know, it really wasn’t bad. It was a little acidic against the sweet sauce, but I could really taste the ground ginger that I had put in the sauce when I took a sip of wine. It was nothing if not refreshing. And with the side dishes I had made (sautéed zucchini with onions and brown rice), Fume Blanc was a nice partner.

And, so, after the grill flame up, the smoke alarm and the crying baby, my first grilled ribs were overall a success. Am I ready to take over all grilling duties this summer? No. But I’m willing to pinch hit for HOB every now and then.

Stop by The Restaurant at Ponte for some delicious grilled dishes like Pork Porterhouse, Grilled Caesar Salad and Grilled Mahi Sandwich. Check out the full menus here and click here for reservations.

–Have you ever made homemade bbq sauce? Tell us about it